An international IQ developed at CERN. 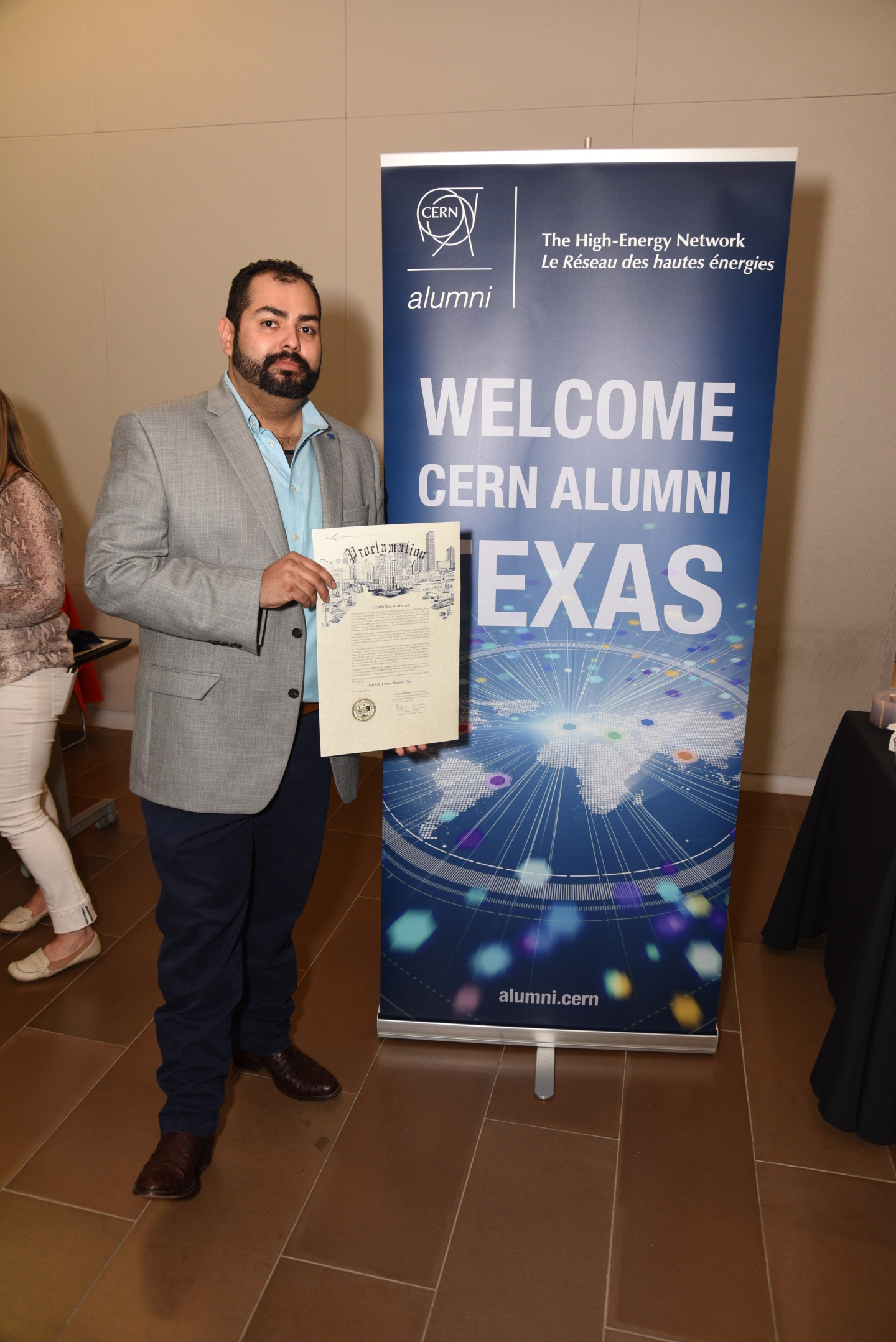 Pedro Paul, now based in Houston, Texas recalls his time spent at CERN with immense pride; after obtaining a B.A. in International Communication, Pedro Paul embarked on a one-year placement at CERN. He contributed to the organisation of the first ICTR-PHE (International Conference on Translational Research in Radio-Oncology and Physics for Health in Europe) as well as developed some of the communication platforms employed within the Life Science Section of the Knowledge Transfer Group. During his time at CERN as an Admin Student, he witnessed first-hand, two momentous occasions.

“I was very proud to be part of history and exposed to something highly relevant.” On July 4th 2012, Pedro Paul was given the job of guiding VIPs, photographers and journalists who had gathered at CERN for the announcement of the discovery of the Higgs Boson.  “It was a humbling experience and being there, directly involved was the difference between just reading about something and actually being present. It was a fantastic experience to be part of history!”
On a par with this, during his placement at CERN, was when Pedro Paul was given the responsibility of escorting the NASA astronauts whilst they were visiting CERN and other International Organisations in the region. Having grown up in Houston, Pedro Paul has been immersed in the daily goings-on at the NASA Johnson Space Center and views its astronauts as heroes. “It was an honour to be involved in the astronauts’ visit; in shepherding them, I felt a huge responsibility to maintain CERN’s reputation and also to provide the best customer service possible. Though relatively stressful, I absolutely relished the experience.”
Pedro Paul explains that whilst not being a scientist himself, his experience at CERN enabled him to become part of the scientific community. Additionally CERN helped him develop his “International IQ”. He explains, “I was truly thrown into the mix, working with individuals who are experts in their particular fields and a vast array of different stakeholders including conference participants, researchers, medical practitioners, diplomats and EU delegates. I had to be able to transition between different stakeholders and engage with them effectively.” Such expertise has served Pedro Paul well since his return to Houston. Back in Texas, Pedro Paul used his “International IQ” in his role as Communication & Partnership Manager with Harris County Houston Sports Authority for the promotion and organisation of the World Corporate Games, held in Houston 2017. His work involved liaising with various consul-generals, government agencies based in Houston, where his tact and diplomacy nurtured at CERN, paired with a genuine kindness, and interest in others came in highly useful. Little did he know when taking on that particular position, he would be pushed to the limit.

Facing the devastation of Harvey and Irma

“The city went through tremendous shock, venues were damaged and we saw a substantial drop in the number of participants at the World Corporate Games.” On 25 August 2017, hurricane Harvey made landfall and caused about $125 billion in damage. The city of Houston was particularly badly hit by the 130 mph winds, a massive storm surge and heavy rains, which produced catastrophic flash and river flooding. “Soon after Harvey hit, Florida was struck by Hurricane Irma. One of our participating companies from Mexico contacted me to say that the company’s offices in Houston were flooded, their Florida office was also closed, and their Head Office had also been damaged by an earthquake, all at the same time!” Reeling from the devastation caused by Harvey, Pedro Paul switched his efforts from the World Corporate Games to getting involved in several recovery efforts for those displaced by Hurricane Harvey, employing nimble, quick and resourceful communications and social media to cope with the rescue efforts. Pedro Paul presented his experience at CERN Alumni First Collisions in February 2018 which can be viewed here. One of the key messages he delivered was that when helping businesses and institutions undergoing difficulties, it is of paramount importance to convince them that your company genuinely cares for and wishes to support society.

When the city of Houston found its calm, Pedro Paul decided to concentrate on another new challenge and founded the CERN Alumni Texas group. What was his motivation for setting-up the regional group? He explained that it was threefold, “Firstly having been an alumni manager for my alma mater I attended in Lugano, I felt I had the skills and experience to gather the necessary information required for establishing and generating interest for the group.” Pedro Paul continues, “Secondly, it’s the opportunity to give back to the community and to connect with individuals who have spent time at CERN and see what incredible things they have gone on to achieve professionally. Thirdly, back in Texas, I found that many people outside of the scientific community are unaware of CERN and its mission. I would like to use the CERN Alumni Texas group as a vehicle to raise awareness about CERN and the research carried out there.”  The first CERN Alumni Texas group event took place in April 2018 at Rice University and Pedro Paul has been extremely active in planning and organising events for Alumni in the state of Texas, including an upcoming webcast of the recently organised CERN TedX hosted by The Village School in Houston. Pedro Paul explains, “This will be a prime opportunity for CERN Alumni based in Texas to interact with high-schoolers and give first-hand insights into the research which is carried out at CERN.” If you are based in Texas or even travel there occasionally, why not sign up to the CERN Alumni Texas group: