Tantalizingly Close to the Physics! 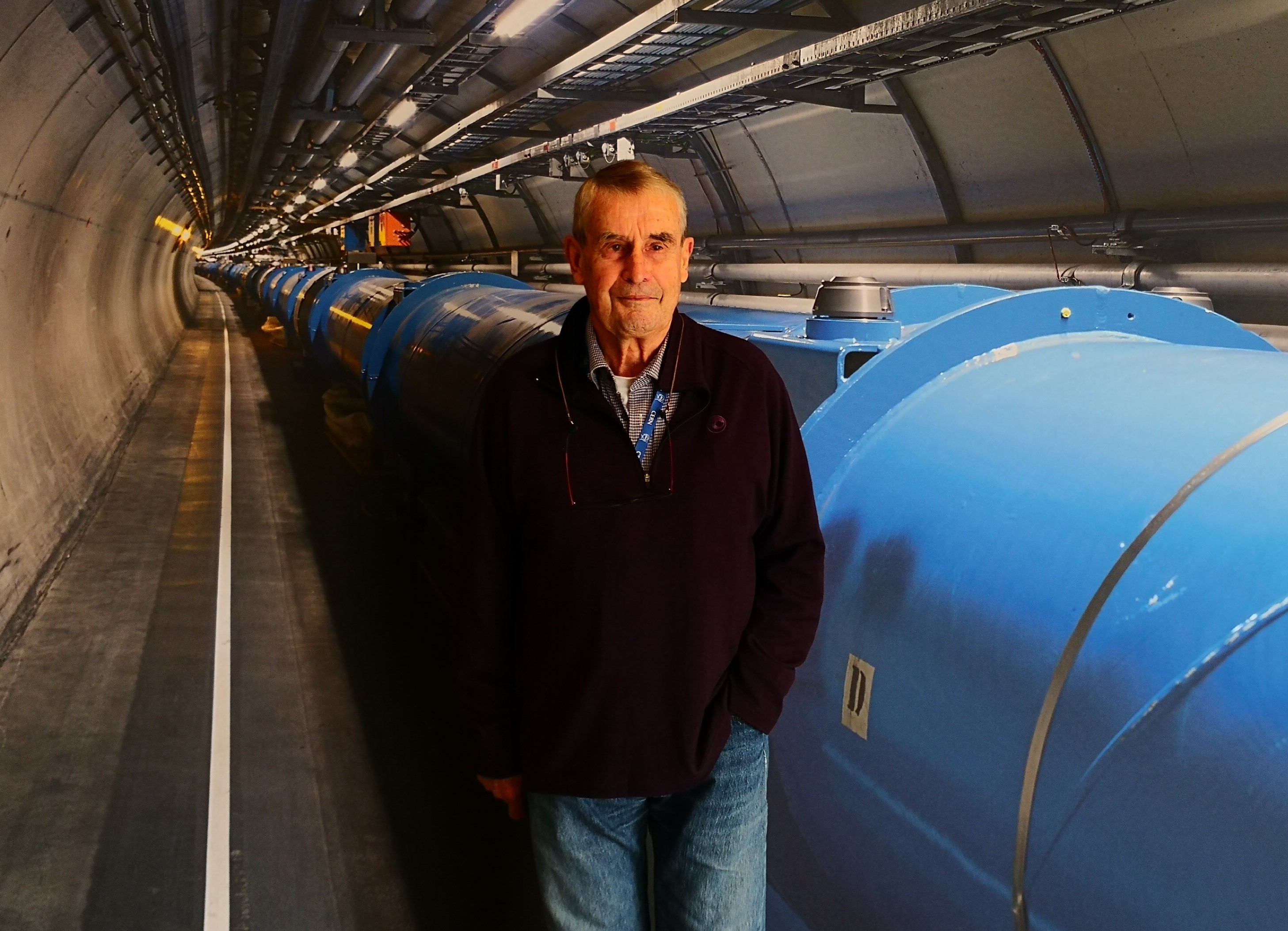 CERN Alumnus: Philippe Gavillet
At CERN: From 1965 to 2006, initially as a summer student, doctoral student, scholarship holder and then staff member in the Physics Department. Member of the DELPHI and then LHCb collaborations.
Today: Retired and passionate about current scientific issues

Philippe Gavillet was twenty-four years old, and CERN eleven years into its existence, when he arrived in Meyrin in 1965, first as a summer student and then as a young doctoral student from the University of Grenoble. The laboratory he discovered is very different from todays. Few buildings, a very agile and maternal administration for physicists, international groups where everyone would meet during data collection.
This was the era of gigantic bubble chambers, impressive, noisy and dangerous due to the use of hydrogen. Never mind that, physicists actually watched the events from the window of this bubble chamber. "It was beautiful and unique! “, remembers Philippe. The analysis of the data was then done using graphs and slide rulers, the first calculators were vastly overpriced at 3000 CHF each.
Philippe also calls this period that of the physicists "with a pipe" where the fashion was to smoke pipes as did N Bohr, A. Einstein, J. Oppenheimer, E. Schrödinger and John Adams. Physicist, Louis Prince Ringuet was himself, a member of the Guild of Master Pipe makers of Saint-Claude!
"There were very few women at CERN at that time and they were mainly scanning girls whose job it was to carry out photo processing. As the Identification of events required the presence of physicists during the processing, many a romanced was formed around these photos... ».

On the advice of Dr. R. Salmeron, a Brazilian physicist exiled to CERN after the 1964 military coup, Philippe completed his voluntary service scheme (instead of the traditional military service) at the Brazilian Physical Research Centre in Rio de Janiero (CPBF). Purely by chance, Philippe left Paris on May 1, 1968 (!) a significant date in French history, which was also the day when the first negotiations to find peace between the United States and Vietnam began.
Professor J. Leite Lopes, to whom he should like to pay tribute, welcomed Philippe to Brazil. "He was a remarkable physicist and the quality of scientists in Brazil was quite comparable to the quality of scientists at CERN, I learned a lot from them about the foundations of quantum mechanics."
Another coup d'état in Brazil in 1968 and the intervention of Philippe and his colleagues at the French Embassy then allowed the exfiltration of many Brazilian students and physicists, threatened by the witch hunt for progressives and scientists.
Philippe tells us "This period is a beautiful demonstration of scientists came to each other’s help, thanks to personal initiatives between scientists who understood and valued each other. Ahead of their respective organizations, we were building bridges to help each other. »
After a 20-year blackout in Brazil, cooperation was finally resumed, in particular with the European cooperation project between CERN and the UFRJ (Universidade Federal do Rio de Janiero) for the DELPHI collaboration, strongly supported by. C Rubbia and J.A. Rubbio, then respectively Director General and Head of the Technology Transfer Division.
Philippe remembers with pride: "With only CHF 25,000 per year, we were able to bring Brazilian physicists to CERN, which enabled Brazil to regain a foothold on the scientific ladder of particle physics.  CERN's efforts were rewarded later. My former Brazilian students are now among those physicists responsible for high-energy physics in Brazil, and members of the LHC experiments. They have become the mentors of today's students."

One of the most memorable moments of his career is for Philippe the incredible challenge of the LEP pilot run, during the summer of 1989: "Management then took the non-negotiable decision to set the start of the LEP for July - August of that year.  It was a very good political decision, but the problems were countless, unexpected and all happening at the same time. Computers were lagging behind, not in terms of their operating systems, but because of their hardware and electronics were in their infancy.  DELPHI's data acquisition system (DAQ) was unreliable and very few staff were familiar with all the equipment, requiring a 12-hour/day shifts system in hot weather. ”
The team managed to overcome all these obstacles and one of its members, a young Portuguese student, Clara Gaspar, then on shift, exclaimed one day at the arrival of a 120 Kbytes event: "Oh a Z0! " and she was absolutely right!
"After a lot of tension the LEP celebration could take place but, during the festivities, we were always permanently in the hole," Philippe recalls with amusement. "A few weeks later, the LEP experiments confirmed a fundamental fact of the standard model, which is that the universe includes three families of neutrinos.”

Tantalisingly Close to the Physics!

"The LEP experiment detectors were a unique opportunity for visitors from all over the world to see physics up close. At the bottom of the DELPHI shaft, -110m underground, we took visitors to the top of the detector 10-15m above the ground and explained that the electron beams collided precisely under their feet. We also showed them the photos of the events that had taken place at the very moment they were watching," explains Philippe, and then he adds, "it was a unique experience, which is no longer possible today! »
He points out that DELPHI has done a lot to raise public awareness of particle physics: "I remember the fantastic show illustrating DELPHI's oracle with its incredible acrobats and lights.”

Philippe has many memories related to the paradigm shifts in IT, where the experiments often played a pioneering role: "In the early 1980s, IBM offered the DD division (IT today) a dozen PCs, the first of their kind. However, centralised computing at the time relied heavily on large computers, such as the CRAY. The experiments quickly grasped the potential of smaller computers and recovered them in order to explore their possibilities.  Similarly, the UA1 experiment used one of the first Macintoshes, sawing it at the base and connecting it directly to the detector's data acquisition electronics, to make it a control system quickly renamed the "McCAMAC".
As for the birth of the Web, almost 30 years earlier, Philippe remembers it all the more as Tim Berners-Lee was working at DELPHI on his RPC (Remote Procedure Call) program, while developing what would become the World Wide Web. "DELPHI's external collaborators, in 1990-1993, who had quickly switched to the Web, were pressing the experiment to build its Web site. He adds with amusement, smiling mischievously, "We even bypassed N. Calder's CERN press office by broadcasting magnificent events directly on the web!”

As a member of the LHCB collaboration since 2000, Philippe is particularly proud to have contributed to the design, development and installation of complex systems that meet the needs of the four LHC experiments.  Among these systems, the Detector Security System (DSS). After alerting PH Division’s management to the lack of a system to manage the dangers related to the environment of the detectors (water, electricity, gas, etc.), Philippe was appointed head of development of the DSS in record time. "The DSS has been operating to the satisfaction of all its users since the beginning of the LHC. It so happens that the fellow I recruited for this project became CERN's IT security manager, Stefan Lueders," Philippe proudly points out.

Philippe admits that he has never imagined retiring. Since 2006, as an honorary member, he has actively participated in the creation of calculation grids on a European but also international scale, between Europe and Latin America, within the framework of the European projects EELA, EELA-2 and GISELA. "The coordinator of these projects was Dr. B. Maréchal, the Franco-Brazilian physicist who succeeded me at the CBPF in 1969. The circle was complete; I rediscovered the spirit I had known there during my voluntary service scheme, some of my former students having become colleagues.”
"I am aware of the extraordinary opportunity to have been a physicist at CERN, and to have had the unique opportunity to choose my projects freely. It is extremely rare today and I feel indebted in some way. It is in this spirit that I follow the scientific news and proffer constructive suggestions when I feel the need.   Among these reflections on the future, Philippe is in no doubt on the role that CERN should continue to play, not only for future particle accelerators but also in the field of artificial intelligence, where he believes CERN has been a precursor.  He is clear: "The CERN spirit of collaboration is created through peoples’ direct contact with machines and the experiments and can be lost if they distance themselves from them. »
Philippe appreciates being a member of the CERN Alumni network and points out that other initiatives aimed at studying what had become of the young scientists had already been carried out. In particular, Tiziano Camporesi launched such a study for Delphi.
"It is essential to maintain our relationship with young people and help them. The ‘cooperants’ who worked under my responsibility all now have great jobs, but what they saw and experienced at CERN, they will never find elsewhere. They have immense pride in stating, "I was there".

In your words, thank you Philippe for sharing your ‘professional tribulations’, congratulations!