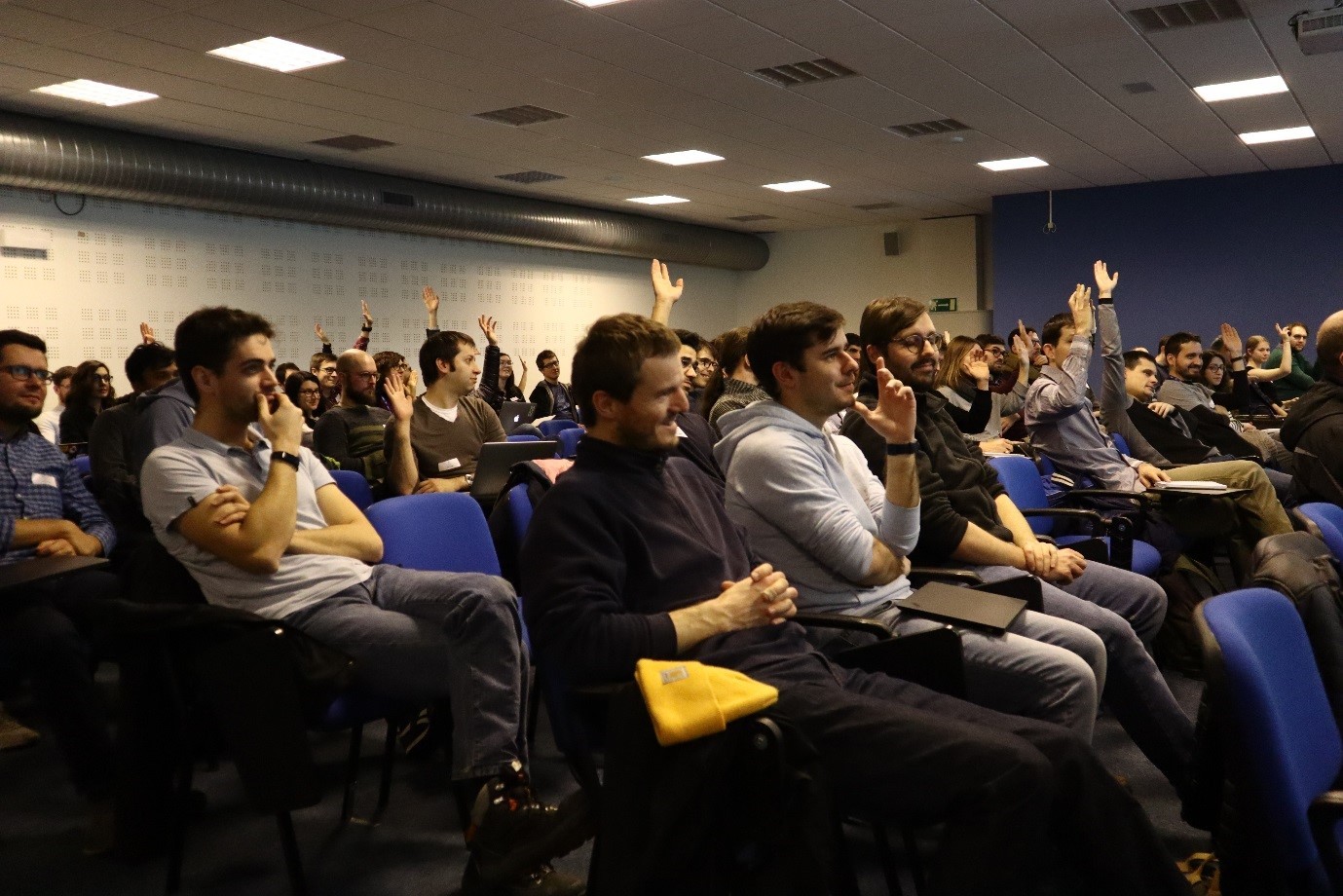 "Great minds for great opportunities" was how panellist, Massimiliano Pindo summed-up the third and most recent edition of the CERN Alumni “Moving out of Academia to ..” series which took place on Friday 8 February and focused industrial engineering. .  More than 150 participants were given the opportunity to exchange with the panellists (all CERN Alumni) from diverse sectors within industry, ranging from watch making, airport security and numerical simulation amongst others, and to learn how they had made a successful move.

The event kicked off with the six panellists explaining their professional journeys from various sectors within CERN or the scientific collaborations, as associates, students, users, fellows or staff, to their current positions. Their subsequent careers have been equally diverse with two of the participants working in the domain of sales and marketing, another as a research physicist in the watchmaking industry, two as engineers in oil and gas and spacecraft cryogenics respectively as well as one who launched his own company.

Making the move from CERN to industry can be a daunting experience. Olivier Denis explained that, following his departure from CERN, he took the strategic decision to take a step back in his career, to convert from the domain of project engineering to sales and marketing, as he discovered his passion for sales whilst following up some of the magnet contracts for the LHC. He encouraged participants to determine what areas they would like to work in and dare to make that move.

Massimiliano Pindo, also working in Sales, succinctly defined his role as a Sales Manager, sharing his motto, ‘Per aspera ad astra’ (‘through hardships to the stars’), stating that, at times, “life is not fair and one has to face far more defeats then victories, but nevertheless one has to pick oneself up and continue!”

After an experience at both CERN and ESS , Cyril Kharoua decided to create his own company specialised in numerical simulations and calculations. He emphasised that he is keen to recruit from the CERN pool of talent, as he knows that an experience at CERN provides a solid technical and scientific background, insights into the most advanced technologies and techniques as well as access to an international environment.

Hannah Rana highlighted the fact that she made just over 45 job applications prior to graduating and discovered when invited for interviews, she constantly had to prove that her skills developed at CERN were applicable to an industrial environment.

Gemma Potestio moved from CERN to become a Rotating Equipment and Package Engineer in the Oil and Gas industry and found herself working to extremely tight schedules, confronted with unfamiliar tasks, such as liaising with clients and vendors. She also had to acquire new skills in instrumentation and in civil engineering; certainly a challenge which she was able to tackle successfully owing to the analytical and critical thinking skills developed at CERN as well as the access she had had to cutting-edge innovation.

Peter Cwetanski, research physicist in the luxury watchmaking industry, is involved in a variety of exciting areas including the science of time measurement, environmental effects on the watches and surprisingly aerodynamics! New technologies are also part of his everyday job, such as additive manufacturing and Artificial Intelligence. Peter explained that, initially, he feared that originating from academia he would be perceived in industry as ‘the crazy scientist’, who would not be compliant with a corporate image. However, he discovered that, increasingly in industry and thanks to the digital transformation and the acceleration of technology, there has been a sea change in working culture, whereby today physicists are in high demand!

A key topic that the panellists were asked to grapple with was how to change the perception of people having worked at CERN being over-qualified or too specialised. One of the panellists confirmed that in some sectors, employers are unwilling to take on candidates with a PhD, simply because they expect to have to pay a higher salary. However, the consensus was that this attitude is now changing. Skills developed at CERN, such as working in big teams towards a common goal, or the capacity to learn quickly and a high level of flexibility are highly sought-after by employers.  Especially in innovative industries, such as the space industry, where the concept of ‘over-qualification’ does not apply.

More questions of a practical nature were pitched to the participants regarding finding employment in Switzerland and the means they used to find their particular jobs. Panellists suggested numerous avenues to explore, including online platforms (such as http://alumni.cern and of course LinkedIn), agencies, head-hunters, networking but also the Forum EPFL. One important recommendation was  to decide on the job, not the location! It was also suggested that those thinking about moving to industry should, first update their profile on http://alumni.cern as well as LinkedIn, employing the ‘buzz words’ used in the particular sector they are targeting.

After just under one hours’ worth of Q&As, panellists and participants networked before resuming with the final session of the day which concentrated on how one should market oneself for a career in Industrial Engineering. Max Pindo led the discussion by establishing that when job-hunting, one should use the marketing theory of the four ‘P’s: namely, product, price, promotion and placement as an effective way to identify and define one’s USP (unique selling point). All panellists shared candid and pragmatic advice on tailoring one’s CV, tips related to enlarging one’s network and revealed insights from the perspective of someone working in Industrial Engineering. The event finished with a final networking session, giving panellists and participants a great opportunity to ask questions and glean valuable information directly from the panellists.

Based on survey results, over 75% participants agreed that the event was a great networking opportunity and 97% would recommend a similar event to a colleague. If you missed out, or simply wish to listen to the discussion again, the video recordings are available at the following URL: https://alumni.cern/networks/events/13267 .

The final cherry on the cake is that our panellists have answered those questions which we did not have time to tackle, on the CERN Alumni Forum: https://alumni.cern/forum/t/294413

Mar 01 CERN in the media