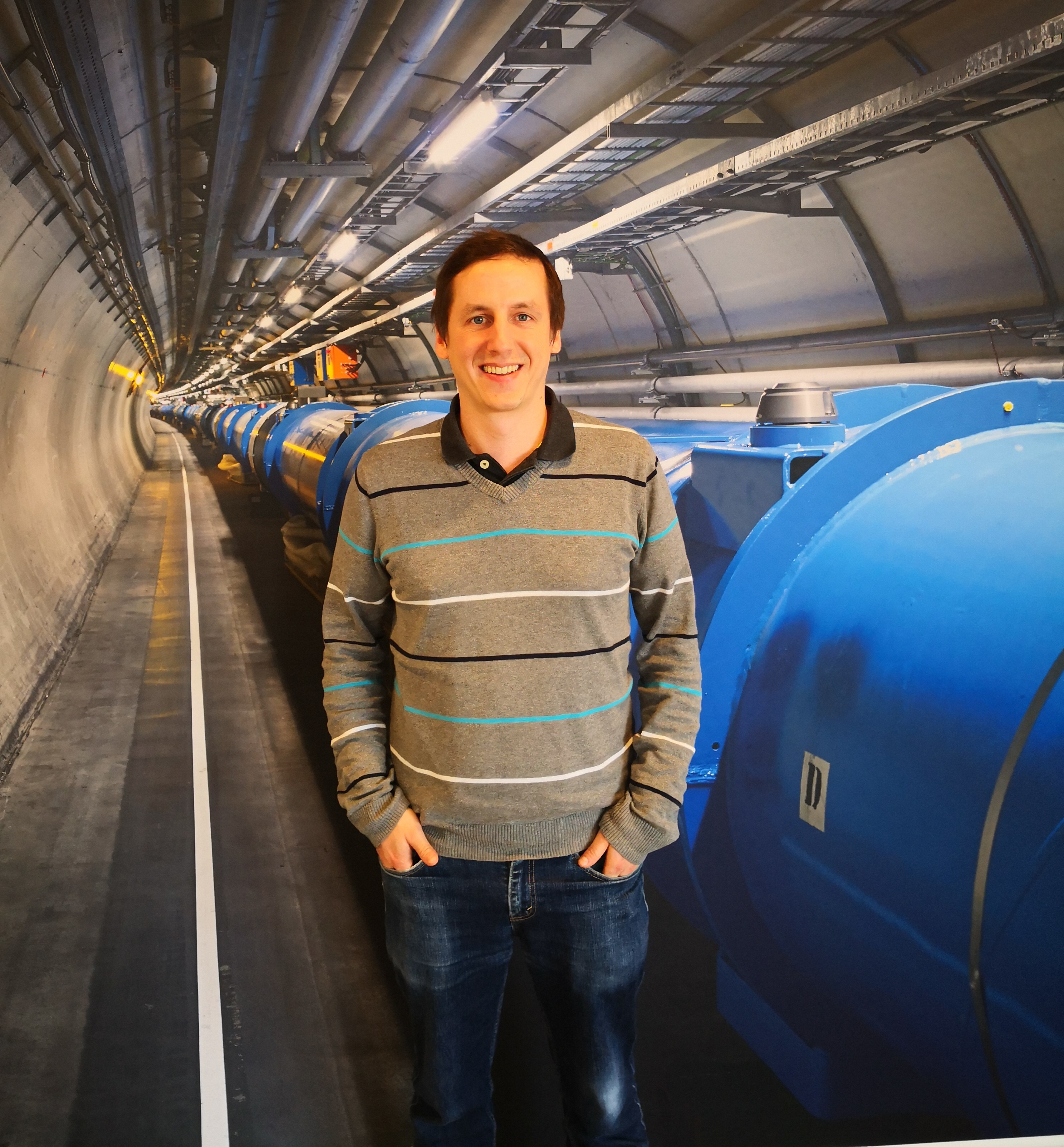 The challenge of pursuing higher education while working

After completing an apprenticeship as an automation technician in 2007, Pascal Bachman started to work as a train electrician for the SBB. When he realized that he wanted to develop further, our alumnus pursued a higher education diploma in electronics and automation. As a result, he had to study two evenings per week as well as every Saturday. Pascal quickly realized that the he could no longer do the night shifts at SBB and found a new challenge as a technical assistant to Physics teachers at Münchenstein grammar school near Basel, where he helped to prepare lessons and experiments for students.

His physics teachers were a great help and, because one of them had spent a summer at CERN, he made Pascal aware that CERN is “a very special and impressive place”. He became fascinated by the research conducted at CERN and started looking for a job at jobs.cern in 2016.

Fully integrated into the team at CERN

Equipped with top recommendations from the Physics teachers, Pascal applied for a fellowship and, two phone calls and an interview later, he was offered a job in the Heavy Handling section of the EN department, as an automation technician. “60 of the 320 overhead travelling cranes at CERN are controlled by PLCs (Programmable Logic Controllers). So they took me on!”

The job entailed many different responsibilities, including  contributing to drafting the cranes maintenance contracts, ensuring that all travelling crane data was properly stored and versioned in EDMS, as well as running maintenance tests at the supplier’s manufacturing site in Italy.

Pascal worked for two years at CERN and is particularly appreciative on how he was integrated within the team, with whom he is still in contact.  “Being integrated in a team and given all the support you need is especially important at the beginning of a career as this makes you gain confidence in what you can achieve.”

“ I loved working with people from all over the world, interacting with suppliers and acquiring unique expertise about specific technical areas such as using PLCs to make cranes move fully automatically .“

No woman no crane

When asked whether he considered working at CERN after his fellowship, Pascal explains: “I had two contracts to serve at that time:  one with CERN and one with my girlfriend and the latter was not negotiable” so he went back to Buus (BL) as promised.

“Finding a job was easy“, Pascal remembers “ I applied for three positions,  was invited for two interviews which resulted in two offers that I had to make a choice between”.

Pascal opted for an international logistics automation company. “My new employer was definitely interested in the fact that I had worked at CERN, and they even asked me about the LHC tunnel during the interview. My experience with different kinds of PLCs and the experience in an international work environment particularly retained their attention. “

One year later, our alumnus confirms, “I love my job and I have a lot more to learn where I work, I might be looking for the next professional move in the future but not before the next few years. Why not at CERN … if our dual careers can gain from it”.

We met Pascal when he attended the WEB@30 event earlier this year.” I had never attended such an event before and I was fascinated by the discussions on the future of the WEB and by seeing that people were actively working on making a better future. One of the panelist, Zeynep Tufekci, was particularly inspiring.”

Time to go to bed

Pascal admits that he has not used the CERN Alumni Network a lot so far but is happy that it helps him stay in contact with the people he met during his time at CERN. He admits that he had to fight to make it to our interview because of former colleagues wanting to meet up with him.

When asked whether he reads the CERN Alumni weekly digest, Pascal says with a smile “When my smartphone beeps on Sunday around 22:00, I think: oh it is CERN Alumni, time to go to bed!”.

Pascal, we are delighted that CERN Alumni is fully integrated into your schedule!

The waltz of the LHC magnets has begun

May 29 Nouvelles du CERN
SSO login
Not a member yet?
Join Now!