From Building Churches to Constructing Cathedrals

CERN taught me my job as a telecommunications systems architect 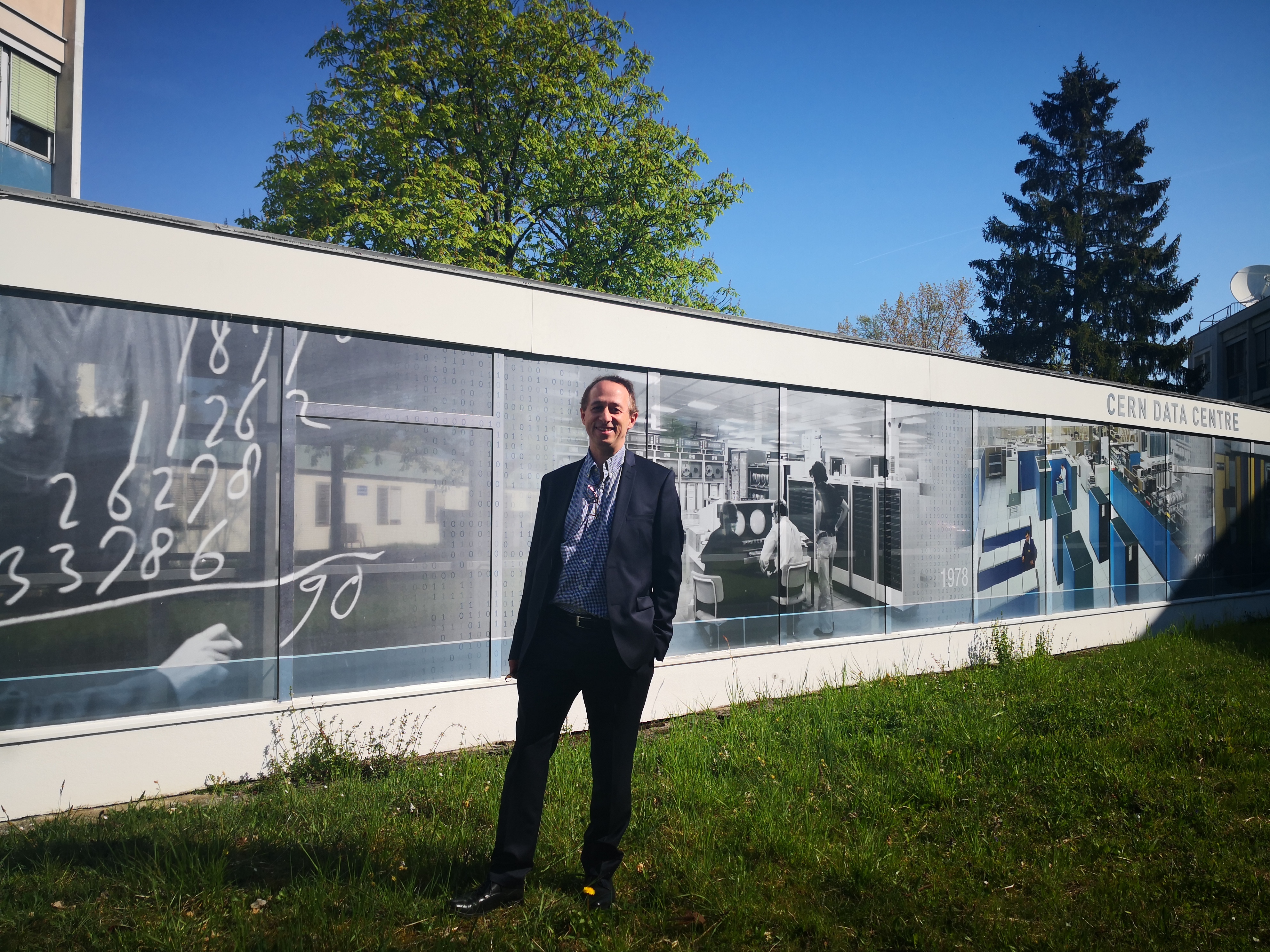 A young Engineering graduate, fresh from ENST Bretagne (École Nationale Supérieur des Télécommunications) and with a DEA (Diplôme d'études approfondies) in artificial intelligence and advanced programming from IRISA, notably due to his internship in social mathematics at the Russian Academy of Sciences Moscow. Arnaud Taddei arrives at CERN in 1993 as a Fellow in what was then known as the CN Division (Computers and Networks).

His main mission is to serve as a backup for Dietrich Wiegandt, to ensure the service of UNIX systems (Ultrix, OSF1, etc.) in case of absence but he also has the opportunity to mount a storage extension for the first WEB server on which Tim Berners-Lee was working.

Arnaud pays a warm tribute to Dietrich Wiegandt, his colleague and friend, about whom he says "He sensed the machines, and simply by looking at the logs running on 7 or 8 different windows of his DEC workstation, he could say "Stop something is not working", in fact he was compiling the logs at the same time in his head!”.

Arnaud becomes a Staff Member in 1995 and is in charge of a project that will allow any physicist in the world to have the same technical experience regardless of the system in place on his/her workstation, especially in terms of those infamous HEPiX scripts, which have been in production for almost 25 years. Then, he works on the migration of eight messaging systems on one of the first open source internet-messaging platforms. "I thought it would be a 6-month project but I spent 15 years there and it had an impact on my whole life.”

Arnaud continues, "There was a real technical architecture problem and leading components were missing, such as load balancers, large LDAP services, migration tools, archiving tools etc.  The stakes were also very high in terms of resources, since this new messaging system would reduce the number of people dedicated to support from 43 to three.  During this period, I managed about fifteen collaborators, many of whom are no longer at CERN but with whom I am still in contact. Therefore, I also acquired a great deal of management experience. »

"It is thanks to this project that I became an architect and really understood the nature of this profession. Later, what we did for 20 thousand users (at the time the project included Caltech and INFN) I had to do for 200 million users, in a second life.”

A decision too difficult to accept

In 1999, the new management rethinks the global architecture of information technology systems and one of the possible options considered, is to migrate messaging services to a commercial solution such as Microsoft Exchange. From Arnaud's point of view, this means dropping the current project and reducing to zero all the work invested in a new messaging system.

He remembers: "We were in the dot-com bubble, where we thought everything could be outsourced. It is a shame because CERN was already doing big data without knowing it, it was very good at open source and I think it could have become a great service provider for the entire HEP community. We even modelled users on 22 attributes to understand how the messaging service would be used. However, maybe the UNIX interface was too demanding for users at the time. In any case, the decision was made to stop the project I was working on and I admit I had difficulties understanding this choice.

Arnaud is offered an indefinite contract, but on principle, he resigns in September 2000, without a back-up plan.

Your office will be the plane.

Word of Arnaud’s departure from CERN spreads like wildfire and he receives three job offers a day for 3 weeks.   He is about to accept an offer from SUN Microsystems, the American IT services giant, but is worried about having to leave the Geneva region, a place he has become very attached to.  He is very quickly reassured on this point. Working as a consultant for SUN customers in Europe, the Middle East and Africa (EMEA) will not require him to move, as his office will be the plane. So his manager tells him.

"It was a culture shock," remembers Arnaud, "I was part of an excellent team and people in key positions elsewhere today have very often come from SUN. Surprising too is that the crux of the matter is money and the onus is on billing your time and reaching your quotas!”

Excellent team yes, but Arnaud also describes the skills deficit in his new professional environment as extensive compared to CERN. "At that time, still in the dot-com bubble, anyone who had read a user manual was called an expert...," he recalls.

What architectural solution to increase from 20,000 to 200 million users?

Indeed, there was no theory, course or method of architecture in computer science at the time. To answer this central question in his new position, Arnaud turns to his father, who was very knowledgeable in art history, and asks him the question: "How did men go from being church builders to cathedral builders? The answer is clear: "They understood the importance of physics and pointed arches and the possibilities that the new dimensions open up.  As they become larger, the stained glass windows are brighter and tell stories, which people are more willing to adopt.  Equipped with this nugget of information and a small book on the theory of design in civil engineering, Arnaud creates his method as an architect. He designs and migrates more than 17 SUN Microsystems platforms in 7 years across the world, (at the time used by about 200m users), some of which have been in production for almost 20 years.

However, history repeats itself. Arnaud and his team’s missions are no longer at the centre of the company’s strategy and consequently, resources and investments are lacking. All this despite the fact that Arnaud is elected among the company’s 100 Principal Engineers in 2006. This is incomprehensible for our spirited alumnus, who, after an episode of severe burnout, decides to open up to other possibilities.

The importance of storytelling

A connection at Symantec convinces him to join the number one in IT security in April 2007, as architect of telecommunications systems for network operator customers, in the EMEA regions. New company, new experience and new managers with very varied styles and skills, but the company has very strong assets, and Arnaud continues his career there, initially within the sales team.

It was then that he made a very significant encounter with a colleague. A former executive of Deutsche Telecom, offers Arnaud guidance to help him transform his perception of industry and business.  Everything changes for Arnaud when he understands the importance, in professional relationships, of identifying the key message to be conveyed - the story - and preparing it carefully.  His advisor also makes him aware of the importance of prior agreements with those involved in the decision-making process, and the value of waiting for the right time, generally that of feedback, to make a proposal and increase the chances of its adoption.

Arnaud uses these techniques every day and can count on the work of hundreds of people with whom he has no hierarchical relationship. "You have to negotiate and convince, and above all keep in mind what the value of a project is for the company.  I also understood that information sharing is essential,” he explains. This new working method proved to be highly successful because he was quickly promoted to Director working alongside the company's Chief Architect and then to Director of Standards and Architectures working directly with the company's CTO.

A deep dive into dark matter and Middle-Earth

"I am 50 years old and I am having the time of my life," says Arnaud. "I have had the opportunity to chair the 3rd working group of ITU-T Study Group 17 (Security)[ https://www.itu.int/fr/ITU-T/about/groups/Pages/sg17.aspx ]which made me discover the world of geopolitical interests and the challenges around standardization". Commission 17 covers a broad spectrum of security standardization and Arnaud has succeeded in having an incubation mechanism adopted that now allows, among other things, work on quantum security.

"Sometimes I pinch myself to wake up believing I am in a world of the Lord of the Rings. The stakes are incredibly high. This is a huge battlefield, in which lurks a dark matter, formed out of the divergent interests of member states, private companies (including GAFAM) and non-governmental organizations”.  This job as president, two weeks a year at four o'clock in the afternoon is a revelation for Arnaud and an intellectual and relational challenge that he seizes with immense pleasure. It drives him to become a consensus builder and when it works, it is a little magical.

Arnaud's other mission is to find alternatives to the colossal problem of interception and to find a balance between privacy and security extremists. It is a pure designer's job "My boss warned me that I would need the collaboration of an anthropologist, an ethicist, a philosopher and a psychologist for this responsibility and he was absolutely right. In this role, I use absolutely everything I have learned since my engineering studies.”

This also led him to the Internet Engineering Task Force (IETF) where he met Brian Carpenter, an illustrious CERN alumnus. The IETF is also a battlefield of unsuspected ferocity.

"CERN has enabled me to acquire architectural skills in telecommunications solutions. Moreover, all this whilst working alongside incredible people and world-renowned experts. These people were in a class of their own, possessing not only very strong technical skills, but also vast experience, hindsight, risk management and long-term vision. The pressure and requirements of physicists make CERN a unique environment.  I was also able to see how well a division, led by David Williams was working, as he had set up an organisation and a centre of expertise that delivered on its promises.  This is CERN's school of thought, either we have been there, or we have not!”