The challenges of teaching controls and sensors technology in Africa

Live your Dreams and Don’t Dream your Life Away! 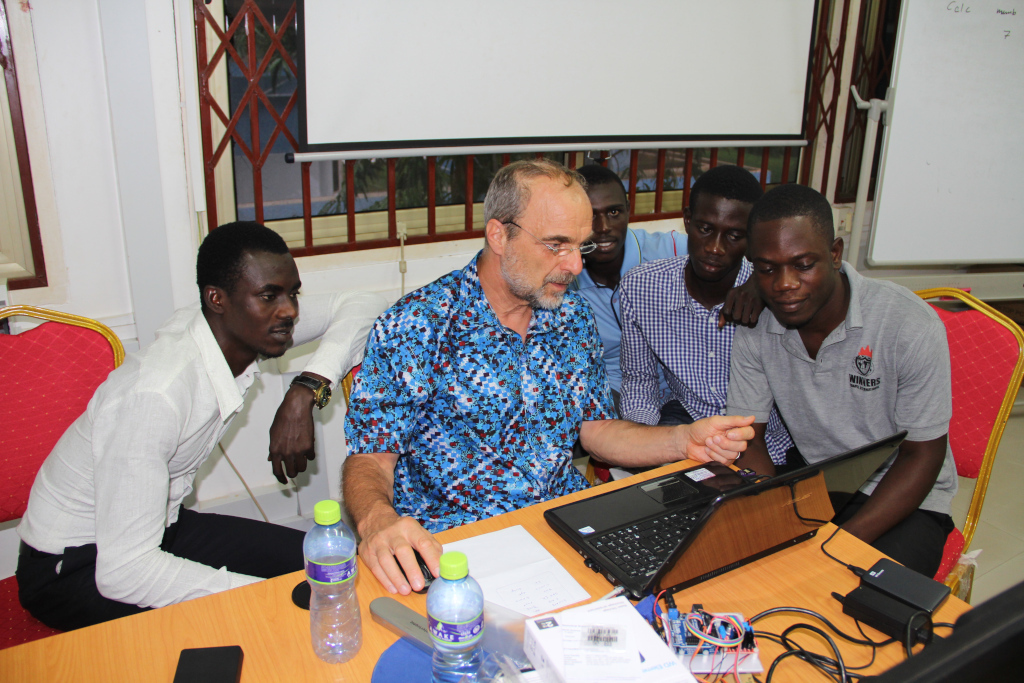 A PhD with the LEAR Programme

How do you imagine your retirement? Some people are content to fill their days with golf, others enjoy spending time with their grandchildren and some wait until retirement to travel the world, and many enjoy all of this! After a fruitful and gratifying career at CERN, our featured alumnus Uli Raich explains he did not even wait until retirement to fulfil his dreams; he has been doing so throughout his whole career.

Uli’s first experience at CERN was in 1978, when he came from a small town called Calw (the birthplace of Hermann Hesse) which is between Stuttgart and Karlsruhe, Germany to work on the LEAR (Low Energy Antiproton Ring) experiment at the PS. At the time, he was completing his thesis in Karlsruhe. He initially worked on LEAR for about 3 years as a visitor then he became a fellow.  Uli explains that despite working in the same Organization, it was completely different working in an experiment at CERN compared to working as a fellow,

“When working for the experiment I felt I was much more linked to my home institute than CERN, but as soon as I became a fellow I felt more attached to the Organization and my group became much more international.”

Frustrated by the controls buzz words

After obtaining his PhD Uli started working on LINAC 2 in the PS Division. Each time Uli spent about ten years in the same position before feeling the need to change,

“This is because every few years there is a reorganisation at CERN. After one such reorganisation, I ended up working in the controls group simply because the controls section of the LINAC went to the controls group. This for me was somewhat problematic as I was a physicist, not a controls person. I used to get vaguely frustrated when people in controls threw around buzz words I wasn’t familiar with”.

A common theme through Uli’s career is that he has always actively continued to develop his skills, knowledge and expertise. Taking up this new position in the controls group spurred Uli to go back to University.

“I started a Computer Science degree by correspondence with a German University. It was tough, I had to dedicate two to three hours of study per day, and I didn’t have a tutor. However, a colleague of mine was also interested in taking the same course, so we studied together.”

Despite the success rate being extremely low (1% to 2 %) Uli finished the five years having completed all the courses and the exams. However, he was unable to dedicate six months required for writing the final master thesis; nevertheless, he had gained vast amounts of valuable knowledge as well as a firm understanding of the controls ‘buzz’ words.

Technical Training at CERN leads to teaching across the World

Early on in his career, Uli was given the opportunity to share his knowledge and expertise with the future generation of scientists and engineers, but how did this come about?  Back in the 1980’s Technical Training at CERN was rather different from today,

“At the time, CERN’s Technical Training offerings were not dissimilar to university courses; some of them lasted up to six months and went into great detail. I took the course on microprocessors, which incidentally had started to conquer the world in the beginning of the 1980s.”

It was following this particular course that one of the lecturers asked if Uli would be interested in teaching at the ICTP, (International Centre for Theoretical Physics) in Trieste. Their goal was to set up courses for students, essentially from developing countries, and they desperately needed someone to teach the practical part. So began 35 years of Uli giving three to four week courses every two years in Trieste and in other developing countries.  Not only did this bring Uli into contact with a huge network of future scientists with whom he could share his knowledge and expertise, but it also gave him the opportunity to travel extensively around the world. Uli forged many friendships over the 35 years and has remained in touch with numerous students he tutored. One of whom has become a leading figure in Africa (1) responsible for establishing internet in West Africa.

“I have known him for 30 years! One day, we were chatting via Skype and he invited me to lecture at his university, (University Cape Coast in Ghana) to run a course on embedded systems. Of course I accepted!”

The void in Africa

Uli left the Geneva region for Ghana for four months and once established at the university, launched into a mixture of formal lectures and practical exercises with his students. His course focused on embedded systems and microprocessors to which one can connect sensors or actuators to control or read out real world objects connected to the internet. He began by introducing the devices, as well as an introduction to programming.

“I was astonished that after a full semester of lectures on programming, my students were unable to align five lines of code! With a little investigation, I realised, this was because previous lecturers would use a textbook, white board and paper and no practical exercises. It only took a month to make them self-sufficient though!”

Then they made swift progress, starting with simple but effective exercises, such as writing a program to light up a lamp,

“To see the lamp coming on thanks to their own programming brought them so much satisfaction, it was such a great experience!”

Uli guided his students through increasingly complex tasks, setting up prototype sensors to read temperature and humidity with the intention of installing such sensors to monitor agricultural conditions within the School of Agriculture and Natural Sciences. An ambitious project, not without its challenges.

“Firstly, you have to take into consideration that the devices will be installed in fields and will need to communicate with the base station over several kilometres via the internet. In addition, the technology is relatively new and the sensors do not always work properly. I purchase this equipment from China and struggle sometimes to understand the documentation. So much so that I contacted the company directly when I encountered problems. They told me they were writing a new manual, sent it to me and I re-wrote about 50% of it!”

Numerous other hurdles have to be overcome to see the project become a reality. Uli shadows a Ghanaian lecturer, who is continuing the project he started, but he is overloaded and progress is slow. Uli expands,

“One of the issues is that there is a sort of void in Africa. The infrastructure exists and it is OK. I would argue that it is not a problem of money, but a problem of knowledge. Currently, those who are teaching have not benefited from a solid education; therefore, it is a vicious circle. I still try and oversee the classes and yell a little when things are not going as well as they should!”

Apart from the teaching experience, we quizzed Uli about his everyday life during his four months in Ghana,

Sensors to tackle the problems of African farmers

Following Uli’s four-month experience in Ghana, now back in Europe, he is still working hard on prototyping the sensors. He hopes that eventually, they will be installed in Ghana and will start taking data over the whole year. This will enable harvest analysis to be carried out and allow them to make the necessary irrigation adjustments. Furthermore, there is potential for the same type of systems to be applied for other purposes. GPS sensors can be attached to cows so their owners know if they are about to wander in to their neighbours’ crops. On the University Cape Coast campus, this technology tracks the university buses too. Students can see where the bus is at all times!

All on the same level at CERN

Other than the initial training opportunities and support from CERN for Uli to continue his development and enable many others across the world to benefit, Uli reflects on his long and fruitful career at CERN,

“I had many bosses, but never said ‘vous’ to them. We were all on the same level, sharing the same interests and goals. We were a very tightknit team,”

These are the values Uli has carried with him throughout his career and has applied in role as a teacher and mentor. What other advice can Uli share with us? Continual learning is of paramount importance, as Uli so eloquently states,

“If you stop learning, you’re dead!”

We are with you on that Uli, thank you!