Teamwork Across The Globe: How We Connected an Astronaut in Houston to Audiences in England

The idea to start the CERN Alumni Texas group was floated in 2017, only a couple of months before Hurricane Harvey flooded Houston. The High-Energy Network promised to be a channel for former researchers; linking Texas alumni to former colleagues and experiments, providing introductions to post-academia subject experts, and hosting links to career opportunities. Above all, it was also a means to reconnect alumni to CERN’s mission.

It was also during this time that Rachel Bray, our community manager, introduced me to Connie Potter, responsible amongst other things for the CERN Festival outreach programme and CERN Special Guests and also co-founder of The Big Bang Collective. The Collective is a core group of people active in taking physics to new audiences, such as at music and culture festivals. Read Connie's article "OUR FIRST VISITOR WAS COMPLETELY NAKED."

More recently, Connie reached out to me for some ideas for the World of Physics at the WOMAD festival. WOMAD, short for the World Of Music, Arts, and Dance takes place annually in Charlton Park, England. Founded by rock musician Peter Gabriel, the festival is also home to the World of Physics Pavilion, where audiences have the opportunity to experience the intersection of arts, culture and science. Aware that I was in Houston, Connie thought I could help her with a challenge; how to get an Apollo 7 astronaut in front of a UK audience without an actual flight. During the entire month of July, the United States, NASA, its partners, and space aficionados commemorated the 50th anniversary of the moon landing in events held across the globe. Having the Apollo 7 lunar module pilot speak at WOMAD would be an exceptional treat to audiences. Never wanting to back down from a challenge, it was clear to me that organizing the logistical and technical set-up could be successful if we recruited another local partner- the UK Consulate in Texas.

Speaking about teamwork, no place espouses collaboration more than CERN; researchers across the globe contribute to experiments and programs, partner across disciplines and horizons, and push our frontiers of knowledge. During my days on the Knowledge Transfer team, I was often recruited to support other projects, from assisting press at a historical announcement to leading a group of high profile guests to meet the United Nations DG. Indeed, there was never a shortage of opportunities to help out or new skills to acquire. This remains true to alums today.

Houston- we have a broadcast.

Mr. Richard Hyde, HM Consul-General to the states of Texas, Arkansas, Louisiana, Oklahoma, and New Mexico graciously agreed to welcome Apollo 7 Astronaut Walter Cunningham and offered his home to host the live broadcast. It was an awfully generous gesture considering he had just arrived at his new post only a week before. With our ducks in a row, we had a plan to treat audiences nearly 5K km away.

On Sunday morning, 28 July I went to pick up Mr. Cunningham and his spouse.

After settling in the backseat of my car, Mr. Cunningham leaned forward. "This must be a rather odd task for you," he said inquisitively.

"It's not my first rodeo," I replied. It was a cocky response, but I was trying to hide my nervousness.

"Well, not quite," I replied, shifting my focus to the road. Indeed it was my second time to escort an astronaut around town.

My first time was back in 2012 when Commander Mark Kelly and his STS-134 shuttle crew visited CERN for a week long tour. That visit was organized by the DG-Communication department and it taught me how to pivot between projects. Incidentally, when I logged on to my Facebook account later that Sunday evening, the timeline feature reminded me that event took place 7 years ago to the day. What a coincidence!

At the residence we were welcomed by Mr. Hyde, his wife, and the consular press team. Everyone in the residence felt the excitement in the air, but there was something special happening in the room as well. In the middle of that home in Houston were two interest groups; the UK Consulate and CERN Alumni partnering together to support the Big Bang Collective at WOMAD.

Anyhow, the consular team and I had tested our broadcast system days before the big event. Everything seemed to be in order, but minutes before going live, the software froze. As I rebooted the system, all I could think of was the infamous misquote, 'Houston, we have a problem”. After what seemed like a lifetime, we were set for the broadcast. The consular team and I stepped aside, eager to hear from Mr. Cunningham his account of the early days of the Apollo program.

Shortly after the end of transmission, Connie sent us picture of the audience during the broadcast and shared how emotional audience members were as they listened to Mr. Cunningham’s experience and had the opportunity to actually ask him questions. At that moment I realized how lucky I was. I googled what the odds were of meeting an astronaut, but found nothing. Still, I imagine the odds are much higher if you live in Houston than they are anywhere in England. In my case, being a part of the CERN community increased my fortune. 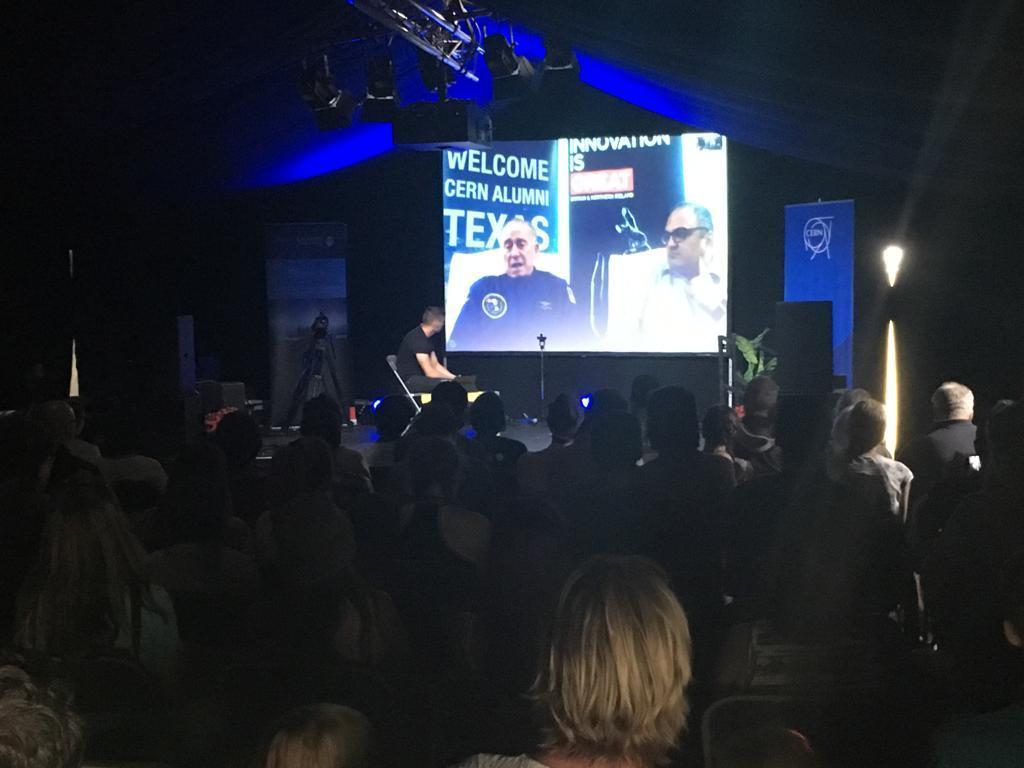 As an alum, I enjoy staying connected to CERN. The High-Energy platform allows me to connect with former colleagues and make new connections. I may not be able to walk down the corridors anymore, but it is still very rewarding to be able to contribute to CERN’s mission, one project at a time.

If you're reading this from The High-Energy Network platform, well done. Don't forget to share the benefits of joining with a friend. If not, what are you waiting for? Join the platform today and contribute your competencies; you can start a regional group, meet students in your neighborhood, or be a guide to visiting researchers. You never know when the next project will take place in your town.