Back to My Roots - The CERN Open Days from the Perspective of Dr. Manfred Höfert. CERN Alumnus and Open Days Volunteer

Back to My Roots

My faithful readers will know that I spent most of my professional life at CERN, the European Laboratory for Particle Physics.
You may also have read that I helped to launch the union of CERN alumni last year participating in its baptismal celebration called First Collision. In fact, in the life of a particle collider, the most exciting moment is when physicists observe the first collisions. 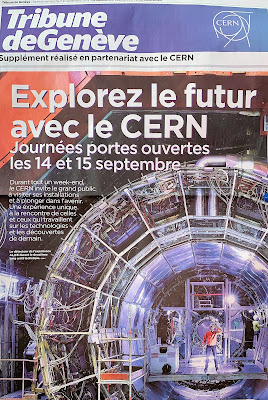 So it was quite natural and nearly compulsory that I volunteered when the alumni were asked to help with the CERN Open Days 2019. 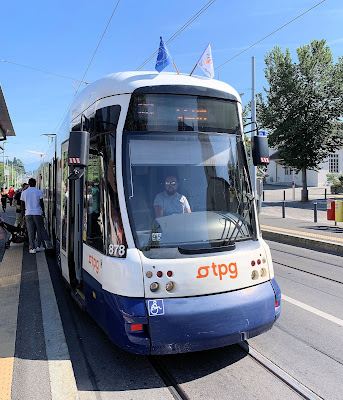 After I had assured may stay I took the train from Freiburg to Geneva. When I stepped on to streetcar number 18, I became already excited because all trams and busses flew flags of CERN and of the Open Days.
Once I had checked in, I went to see the responsible lady asking whether my affiliation for the Open Days may be changed.
Initially, I was scheduled to help in an underground accelerator pit channeling the visitors. This was a little too much for an octogenarian. Besides, my presence certainly would be more useful helping people of my former group explaining the mysteries of ionizing radiation. Rachel also helped me establish a CERN computing account. This was more complicated - safety oblige - than 20 years ago.

Then I started exploring my former place of work.
Later I was busy registering correctly (CERN Badge), and getting my gear for the Open Days (T-shirt and name badge) easily surpassing my target, the number of steps of my daily walking.
Unfortunately, this was not the case when fulfilling my duty at the Radiation Protection Stand during the Open Days. There I was mostly standing to explain to visitors in my languages what natural radioactivity is and that eating a banana increases your personal radiation dose by 0,1 μSv*. This is due to the high potassium content of the fruit containing the naturally present radioactive nuclide 40K.
*Sievert (Sv) is the SI-unit when measuring radiation. This is a big unit, so in radiation protection doses are expressed in mSv, μSv or even nSv
It was new to many visitors that they are a natural source of ionizing radiation too. Two people cuddling up for a night irradiate each other mutually with a dose of 0,05 μSv, i.e., eating half a banana.

Being on a plane from Europe to the States exposes the occasional passenger to a dose of 50 μSv due to cosmic rays. Doses to flying staff accumulate, so pilots and cabin crews are in the category of professionally exposed workers. While at CERN people working in radioactive areas or with radiation sources wear dosemeters to determine their personal radiation doses, doses to flying staff are evaluated by calculation. In fact, exposures to cosmic rays are well known for the routes planes take routinely.
The natural exposure rate in the Geneva region due to terrestrial and cosmic radiation is about 70 nSv/h, but there are regions in the world where exposure to terrestrial radiation is higher. In my time at CERN, the sands from the beaches at Kerala in India were notorious as natural radiation sources. On the exhibition, we had worse. The sand from a beach at Guarapari, Brazil, gave a dose rate of 230 nSv/h. This is due to a high concentration of natural Thorium. They operate Thorium mines in Brazil. Would Einstein go to Guarapari beach? Definitely.
The RP exhibition focused on sources of natural radiation explaining at the same time that professional exposures and radiation doses from CERN activities to the population living on and around its sites are negligible, CERN's "activities" only contribute infinitesimally to doses from natural sources.

All these demonstrations were very popular with our visitors and in most cases extremely useful to dissipate their underlying angst.
The operation of high-energy accelerator produces radiation. Radiation has become a highly political issue, and the CERN management has understood. So I was only mildly astonished to learn that in spite of restrictions on personnel at CERN seventy people are presently working in RP-Group while when I retired, we had a staff of about fifty.

At the end of those highly successful Open Days at CERN, I was tired, but a the same time satisfied having helped my former colleagues selling our trade to the visiting public.