From CERN photographer to MSF missions in South Soudan 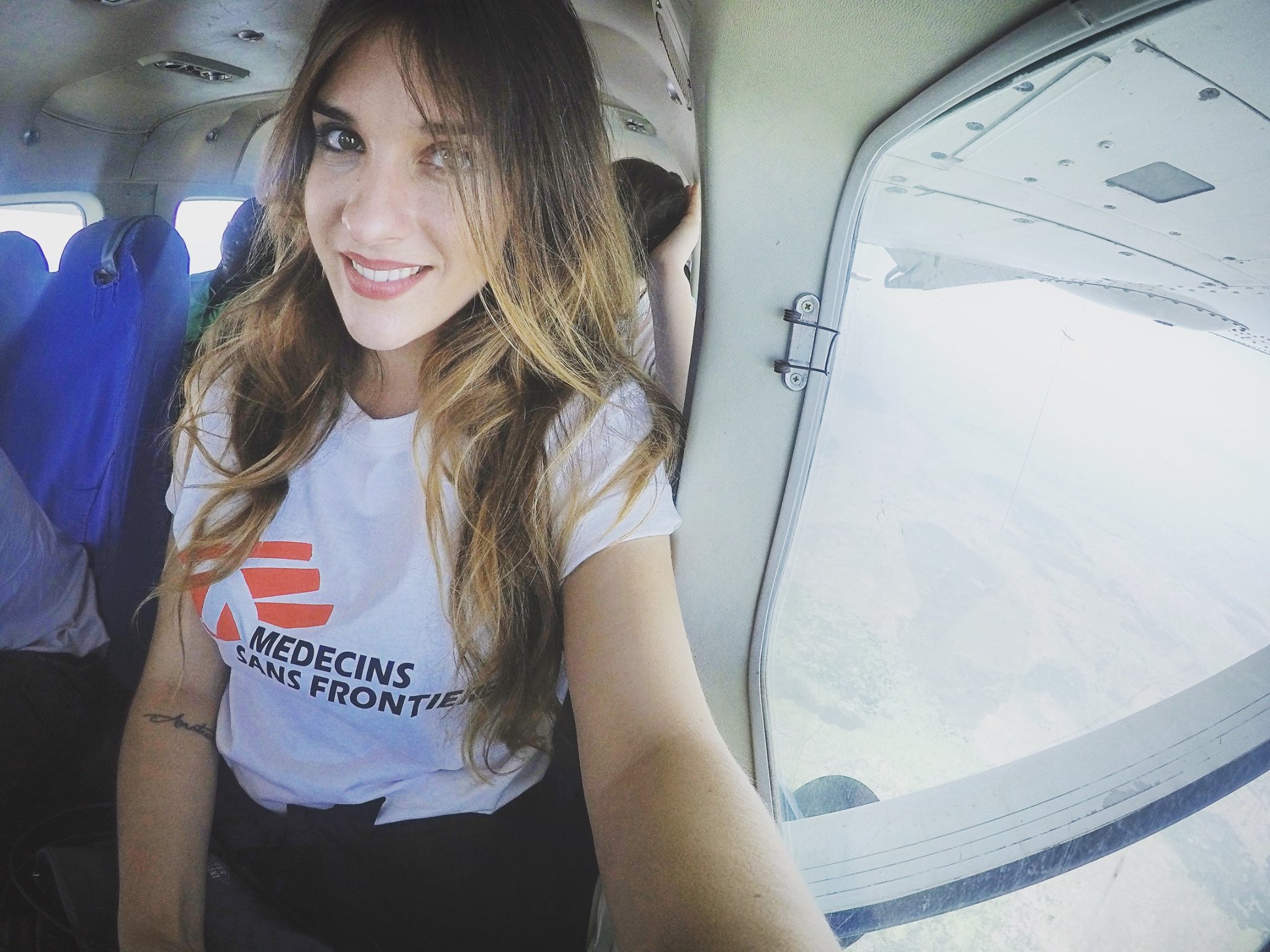 With CERN and its collaborations being one of the biggest scientific communities in the world, it is usually expected that most CERN alumni pursue careers either in scientific or technical fields. Anna on the other hand is one of those rare exceptions who – even though also fascinated by physics – joined CERN to work with its communications team.

Physics and communications at CERN

In 2012, Anna was studying photography at the Technological Educational Institute of Athens when she found out about the CERN summer student programme from two university professors. One was lecturing in the “Physics of Image and Sound” course and the second, from NTUA (National Technical University of Athens), was also a member of the ATLAS Collaboration. Remarkably, even though photography has mostly an artistic side, Anna was excelling in her physics course. She applied for the CERN programme and was selected as a summer student for the summer of 2012. This was her first CERN experience.

Three months of CERN experience seemed too short of a period for Anna, so she applied for an administrative student position and returned to the Organization for a fourteen-month internship in early 2013, working as one of CERN’s official photographers.

“During my short CERN career I was able, as a photographer, to see more than most people. I got very lucky, I was at CERN during Long Shutdown 1 so I had access to almost all places including the underground facilities. Because of Long Shutdown 1, there were many more visits at CERN and, I covered most of them. I remember that I photographed some VIPs such as the Greek Minister of Health, the Prime Minister of France, and Nick Cave who visited to promote his song ”Higgs Boson Blues”, Morgan Freeman with whom I had a short chat, Stephen Hawking, will.i.am and many others.”

Anna considered staying at CERN for a longer period but in the end, she decided to move on.

“What I really wanted was to be involved with the humanitarian field and work for NGOs. Nevertheless, CERN influenced my trajectory from that point on. Work experience at CERN helped me learn how to work in a multilingual and multicultural environment. Furthermore, participating in CERN’s editorial weekly meeting made me understand that I wanted to be involved in communications in a more holistic way, not just taking photos. I wanted to be in a position of deciding what should be communicated. I also learned how communication lines work, and how a big organisation is structured and functions to produce editorial content. Being a young student, you might have read the theoretical aspect but you have no real perspective of how it functions pragmatically. This kind of experience is priceless, regardless of the subject that needs to be communicated.”

Following her interests, Anna moved to London to begin her Master’s Degree in International Communication and Development at University of London. The theme of the degree was examining communications from a humanitarian aspect. While she was writing her thesis in 2015, the refugee crisis in Greece peaked so she decided to move to Lesvos, the Greek island which, at the time, was hosting the most refugees. There she worked as a photographer for NGOs such as “Save the Children” and “Action Aid”. Later on, she started working with “Save the Children” for about 2 years as a communications officer and a few more months with “ASB Greece” in Northern-Greece refugee camps before landing a job with Doctors without Borders (MSF) as a field communications manager.

“From a psychological perspective, my working experience with NGOs has been difficult to manage. While working in Lesvos, I visited refugee camps where children are living with their families in tents. Those tents are dirty, in the mud, they become soaking wet whenever it is rainy, and have to be shared with other families. It is not acceptable that some children are living in Lesvos under those conditions without going to school, while other children have homes and a bed to sleep in. After all, refugees are not criminals, on the contrary, they are running away from problems and upheaval in their own countries. In any case, that is what I wanted to do with my life, to work in the humanitarian field, so I am trying to cope with the emotional aspects of it as best I can. What I am trying to focus on is that, through my job, I am helping people that were not as lucky as I, and to speak up for them about what I see in the field and our patients’ problems. I don’t think that the humanitarian sector is for everyone, unfortunately disappointments outweigh the successes, so individuals who are not prepared to accept this are not going to go far.”

Today Anna is responsible for all Médecins Sans Frontières (MSF) communications in Greece, Serbia and Bosnia. She is based in Athens but her job includes regular trips to the Greek islands and other Balkan countries, as well as missions abroad. Her last mission in South Soudan lasted about four months.

“I have declared my availability for the next mission and I am waiting to be contacted. I prefer to go to places where there is real need for communications like Democratic Republic of Congo, Syria, Palestine and Yemen.”

Regardless of the difficulties, in her own words, for Anna has found her dream job.

The importance of communications

Having work experience in various international organisations already, Anna has often found it very challenging to get internal buy-in for communications. Soon after starting her career, she realised that the importance of communications can be often undermined by other functions within each organisation.

“Most people working at CERN did not even know about the existence of a communications team within CERN. I found it difficult to explain to people the role of communications and its importance. There was, and there still is, some degree of ignorance about it. I always had to explain that the general public would not know about CERN’s mission if it was not for the communications team. I see the same problem in NGOs as well. In order to change things you need to talk about the issues that the beneficiaries are facing. This might vary from turning the spotlight on a specific event, all the way to securing funds for the next year. I believe that it is even harder for CERN since science communication is more challenging in terms of how to simplify things in order to reach the general public without changing their meaning. People perceive it in a simplistic way since it has no immediate effect on their lives. I had to respond frequently to the question of why so much money is spent on experimental physics. In these cases, you have to explain why research is important. Not only for the scientific discoveries but also for the benefits that come out during the process as well.”

Memories of the Higgs Boson’s discovery

Having left CERN about 5 years ago, Anna’s favourite memory is the announcement of the Nobel Prize in Physics for 2013 to Peter Higgs and François Englert. This followed the observation of a particle consistent with the Higgs boson at CERN in 2012 and for which they were awarded the prize. Unfortunately for Anna, when the announcement of the observation was made, she was in Greece for her final university exams, so she found out the news from friends and family that were texting her about it.

“It was quite disappointing to be working at CERN when something like that happened and to miss the announcement because of an exam. However, I was at CERN when the Nobel Prize for physics was announced. I went to building 40 to take pictures with my supervisor, Max Brice. It was so crowded that I needed to crawl between people to get close to Rolf Heuer (CERN Director General 2009- 2015) and manage to take a few pictures. Being part of it was special; this is probably my favourite moment at CERN.”

Anna strongly believes that CERN has had a significant impact on the decisions she took right after she left, as well as a positive influence on her overall professional and personal trajectory.

“I believe that CERN’s name on my CV was very important as it was my first “real” job. Of course you never really know since no one tells you why you were hired, but I am quite a sure that it played a significant role in my professional development.”

To stay connected with the Organisation, Anna joined the CERN Alumni Network.

“It is always good to be able to follow the trajectories of your past colleagues. Such connections can prove useful, especially for people looking for a job within the scientific field. Even for me who decided to follow totally different path; it is very important to stay connected with my colleagues from CERN as it’s a place with a diverse workforce. Let’s not forget, CERN is not only all about physics but it’s also a lot about engineering, information technology, education and (why not) communications! Networking is of great importance and perhaps even more so for people with a great academic career who struggle to make the transition into the commercial job market”

You have our admiration Anna, good luck with your plans!

LHCf gears up to probe birth of cosmic-ray showers