A Spectrum of Talents 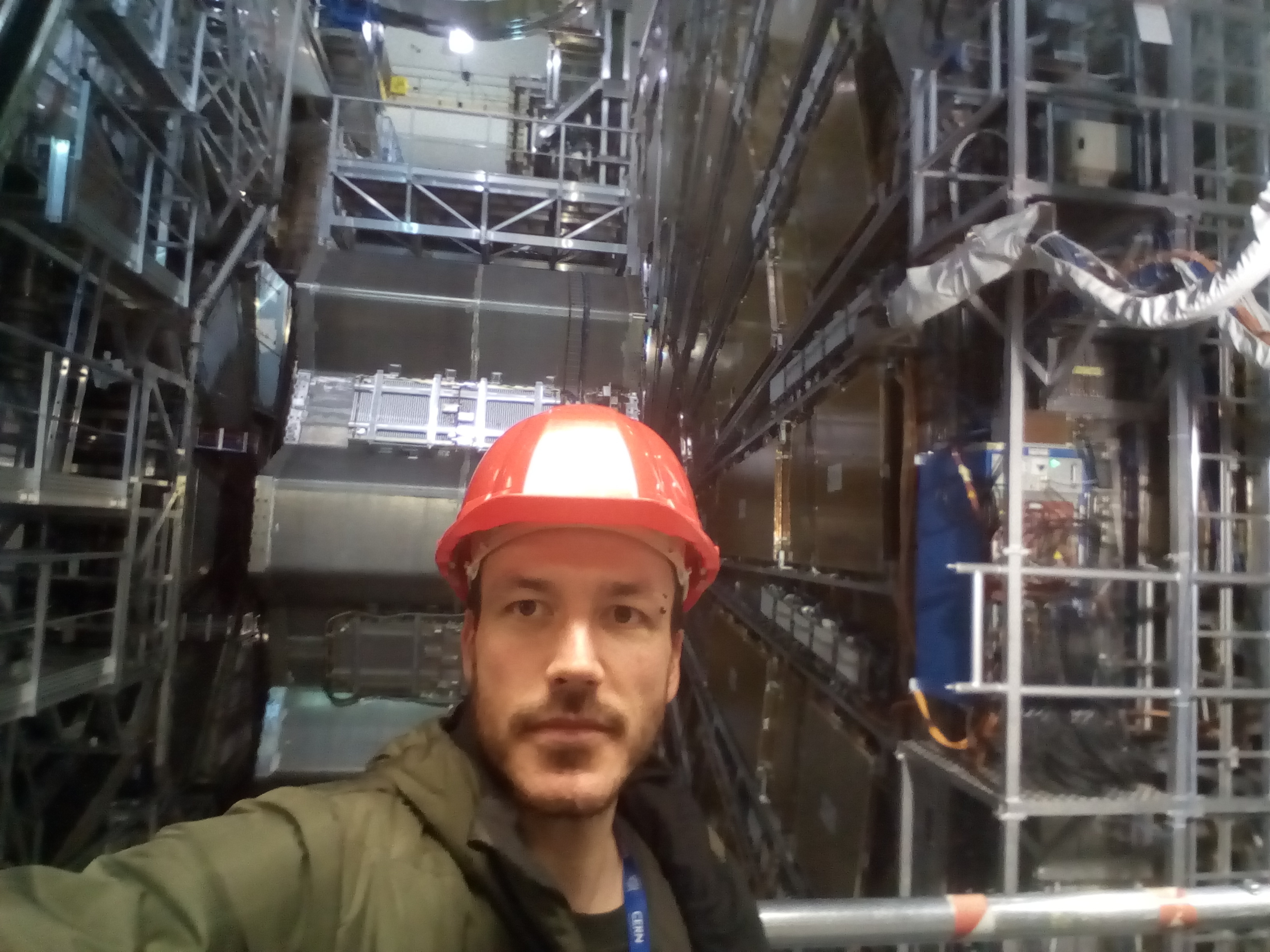 Originally from Madrid, Julio came to CERN as a senior fellow in February 2016 after finishing his PhD in Computer and Information Sciences at the Universidad Carlos III de Madrid in 2014 and six years working as a Research Software Engineer at CIEMAT (Centro de Investigaciones Energéticas, Medioambientales y Tecnológicas). On his arrival at CERN, he integrated the Experimental Physics Department and in particular worked in the Detectors Technologies group.

“I had always been very close to research and was indeed carrying out research in CIEMAT before coming to CERN, but my supervisors had always recommend going abroad, not only to improve my language skills, but also to have my research published in different countries. As soon as I found out I had been offered a position at CERN, I jumped at the opportunity and my boss encouraged me wholeheartedly, I had no choice but to come to CERN!”

Julio was recruited to develop software that would simulate increased luminosity on silicon detectors to help understand how they would degrade due to increased radiation, bearing in mind that the HI-LUMNI upgrade would require greater resistance from this equipment.
“We called the software ‘TRACS’, a multi-thread transient current simulator for micro strips and pad detectors and it was programmed mainly in c++11. To my great surprise, I was recently sent a slide of somebody using TRACS for their experiment Cited in the last RD50 by a researcher using TRACS to develop LGAD sensors and quoting my paper! As it is open source, people are  increasing the capabilities of the software. I am thrilled that people are using my work and further developing it; I am not so surprised as a two year fellowship doesn’t give you much time to develop something in depth! “

Initially expecting something high-tech and modern, when Julio first set foot on the CERN site, he was completely underwhelmed. He found the 1950s and 1960’s architecture rather ugly and was curious to understand where the technology was hiding.

“Very soon, I realised that it was all underground! I admit that when I first came CERN, I did find it tough. Not only was I starting a new job, but I also had to start a new life, find a flat, and learn French. Luckily I met some great people at the CERN induction; in fact we are all still friends!”

Julio quickly settled into life at CERN and in addition to his work, he also became an official guide; something which brought him immense pleasure.
“I recall that some people asked incredibly clever and surprising questions, and in some cases I did not know what to say! “

His two-year fellowship was over in a flash and, in 2018, Julio reached a crossroads in his career. He considered applying for positions at CERN, but reflected on his options very astutely:

“I thought about staying at CERN and applying for a staff position, but ultimately even a staff contract of 5 years would be temporary and would put me back into the same position. I would only be delaying my departure. I thought the longer I stayed at CERN the more difficult it might be to find a job outside of academia, so I decided to take a leap into the unknown.”

Task number one was to establish exactly what he wanted to do. Initially Julio was not quite sure, however, he knew that he derived fulfilment and purpose from working in an organisation which has a global impact for good and not existing for commercial reasons. Like CERN, created out of the rubble of the Second World War, a symbol of science for peace, Julio was keen to find employment in a similar organisation with such a noble mission.

“To be fulfilled, I need to work in an organisation which has a global impact and where the principle goal is not just financial profit. I was not so keen on working for one of the FANG companies. I would say there needs to be a purpose to what I do. Both CERN and the UN were founded after the Second World War and both are a symbol of peace and finding solutions through science, computing and diplomacy. I find this really appealing.”

Although his focus was on job searching in the region, having already left his home country he was not averse to moving to another country for work. I was curious to understand Julio’s process to find his subsequent position after his CERN Fellowship.

Tuning into the right frequency

Whilst it was certainly an advantage having CERN on his CV, Julio felt somewhat lost. He understood that finding a position in research outside of CERN would be nigh on impossible, but he had little inkling of the types of positions for which he should apply within the sector of software development. Julio tackled the job search conundrum with a few different approaches,

“I found it really helpful to seek the services of a coach. In the space of three sessions, she helped evaluate things like my soft skills and gave me some direction in where to focus my job search.”

Some of the hurdles he faced were related to the fact that initially he had little experience in job hunting and all that entails, outside of research. With hindsight, he admits that he was not targeted enough in the jobs he applied for and even applied for too many positions, some of which were wholly inappropriate for his profile. Thanks to his work with the coach, he focused, improved his LinkedIn profile and applied for more suitable positions, some of which he found on the CERN Alumni platform,

“I worked on myself and my LinkedIn profile and was actually headhunted for a couple of positions. Overall, I think I had about five interviews before actually finding my job, which was with a small, public start-up with links to the Internet of Things. I was also called for an interview with the UN and more particularly ITU, but I had to be patient with regards that position.”

One year after the initial ITU interview, Julio received the wonderful news that he had been successful in his interview and they were offering him a job. Since February 2019, Julio has been working in the Radio Communications Bureau at ITU. Julio’s group manages the radio frequency spectrum worldwide along with satellite orbits and terrestrial antennas with the algorithms he develops.

“For example, at the moment with the introduction of the 5G network, there is huge discussion about who belongs to which band, therefore there is a need for an agency to manage and regulate such issues internationally. In addition, if a country wishes to launch an antenna, our group will study the documentation and properties of the antenna and ensure it will not create any interference for neighbouring countries. If this is the case, we include the new antenna in the International Master Registry and so long as all countries affected by the new antenna agree, it is permitted to put in service.”

A Different Breed of International Organisation

Whilst CERN and the United Nations are both International Organisations, Julio exclaims that there are many differences between the two;

“ITU is a more stable work environment; unlike CERN, there is not a huge turnover in personnel, for instance there few to no changes within the team over the period of one year, whilst at CERN there seemed to be a constant coming and going of people. That being said, one finds highly skilled technical people in both organisations, but it is only at CERN where you can find, by far more people still on site, way into the night out of office hours. There is a real sense that people live their work at CERN! That also happens at ITU but not so often”

“Clearly I developed my language skills and improved both in English and French, but I also was given a great deal of autonomy, which meant I had to be proactive. In my younger days, I was much more guided by my supervisors, but at CERN I was encouraged to be autonomous. This is something which is welcomed everywhere. CERN gave me some extremely precious skills which have helped me interact with different cultures, something I would not have experienced had I stayed in a national lab.”

Launching oneself into a different orbit

Julio has weathered the career transition storm of coming to terms with leaving CERN to find a new challenge elsewhere and therefore is full of excellent advice for those yet to launch themselves into a new professional chapter.

“My advice would be to take your time, there is no hurry. Think carefully about what you want to do and prepare everything, yourself, your CV, your online profile so you are headed in that direction. Above all, do not worry, it will happen, you will find a job! Just remind yourself, if you were able to contribute to CERN with its amazing people, you will be able to contribute anywhere!”

“It was super helpful, my first interview was thanks to one of the job opportunities posted on the platform and I was offered the job! The fact that you can apply through the network means that those recruiting know you are from CERN, which is a great advantage and a mark of trust. I also attended many of the events you organise, focussing on career options for soon-to-be alumni! It is reassuring to know you have a wealth of experience at your fingertips on alumni.cern”