Thrust into the Arena of Top-Ranking Physicists. 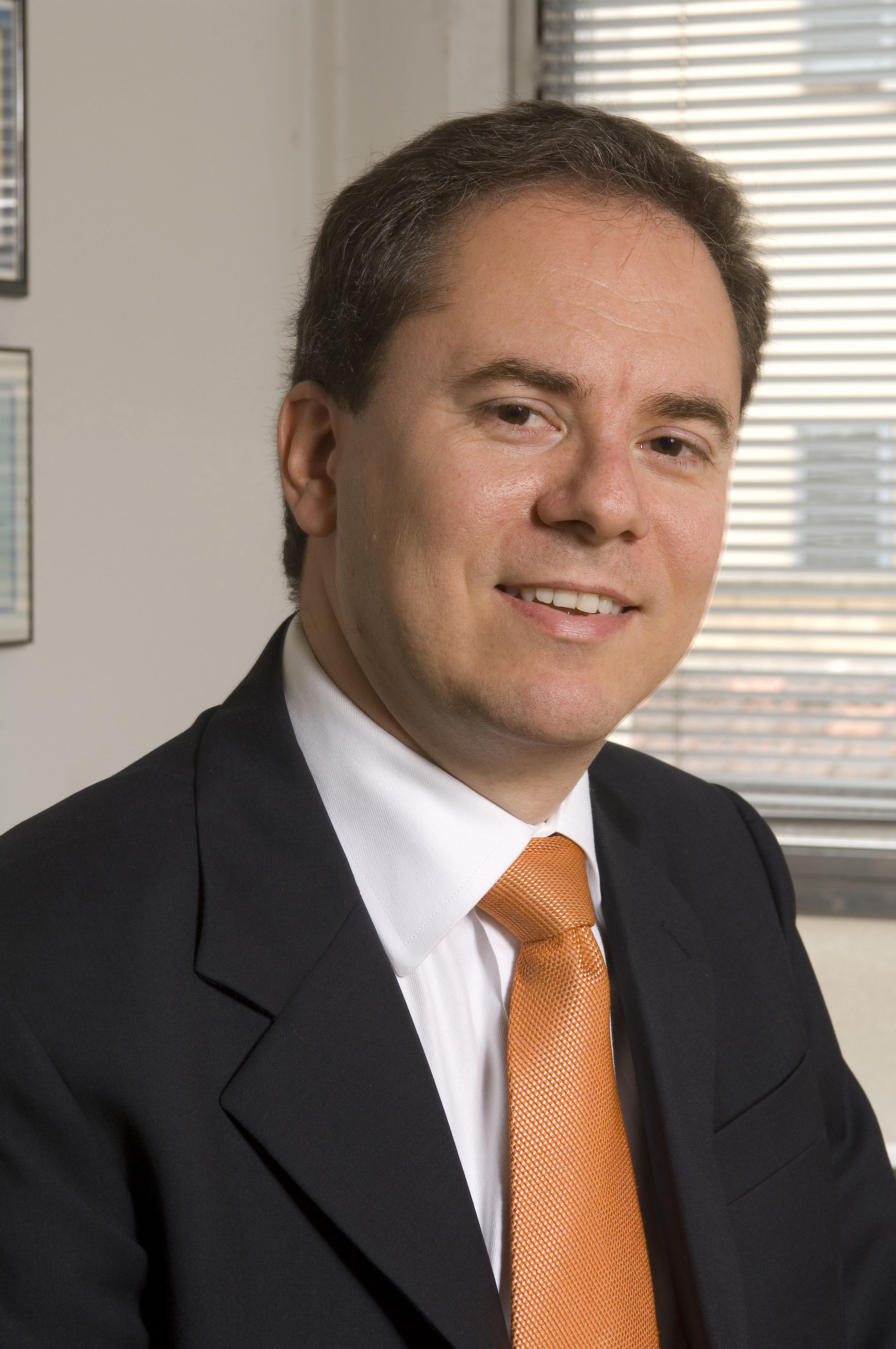 It was thanks to an encounter in Israel with Professor Eilam Gross, where Alessandro Pasta first developed his passion for particle physics.  Eilam Gross [https://www.weizmann.ac.il/particle/Gross], is a faculty member of the Department of Particle Physics and Astrophysics at the Weizmann Institute of Science in Israel and is a member of both the ATLAS and CMS experiments. In 1987, Alessandro, at the youthful age of 18 was selected from a worldwide pool of students to take part in the physics school, “Dr Bessie F. Lawrence International Summer Science Institute”, hosted and organised by the Weizmann Institute of Science at Rehovot in Israel.
“I had a wonderful experience in Israel, where I represented Italy amongst 52 other physics students from across the globe. Professor Eilam Gross, who spent many years working at CERN and was my mentor in Israel, was really instrumental in me applying for the summer student programme at CERN.”
A select few amongst the 52 students were awarded a special distinction, including Alessandro. 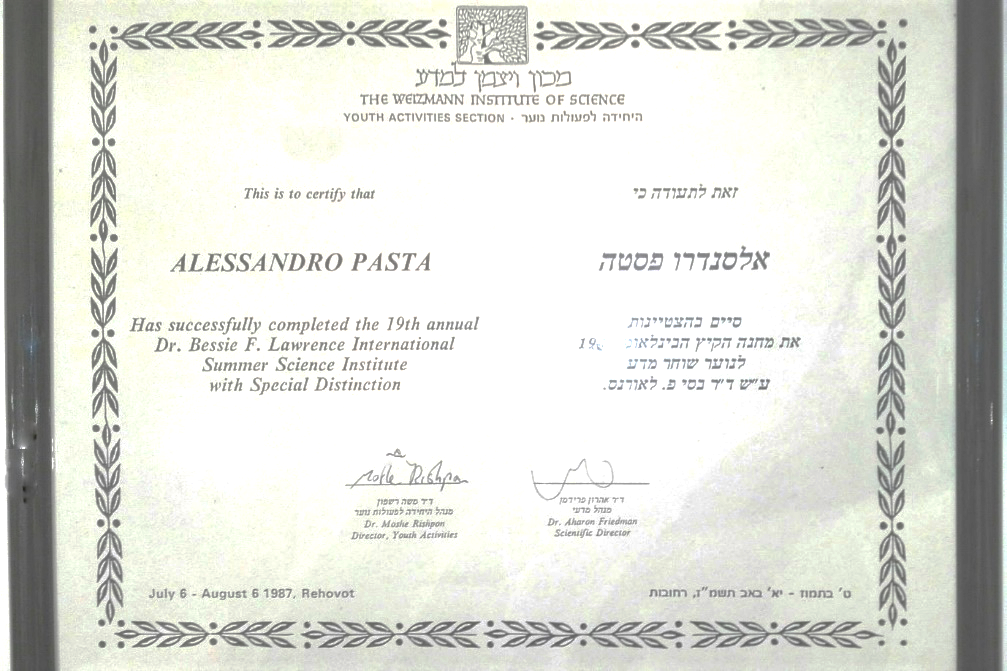 Successful in his application to become a summer student, Alessandro arrived at CERN in July 1991. He recalls with immense joy, his experience as a budding physicist.

“It was such a wonderful experience, we were all housed in the CERN barracks at the time and I had the opportunity to mix with brilliant minds!”
Indeed, Alessandro spent his summer student experience working in the MSGC (or MISGAC) “MicroStrip Gas avalanche Chamber” experiment  shoulder to shoulder with such eminent physicists as Fabio Sauli [https://alumni.cern/users/702959] and Nobel Prize winner Georges Charpak. He and was also given responsibilities which shaped his formative years. 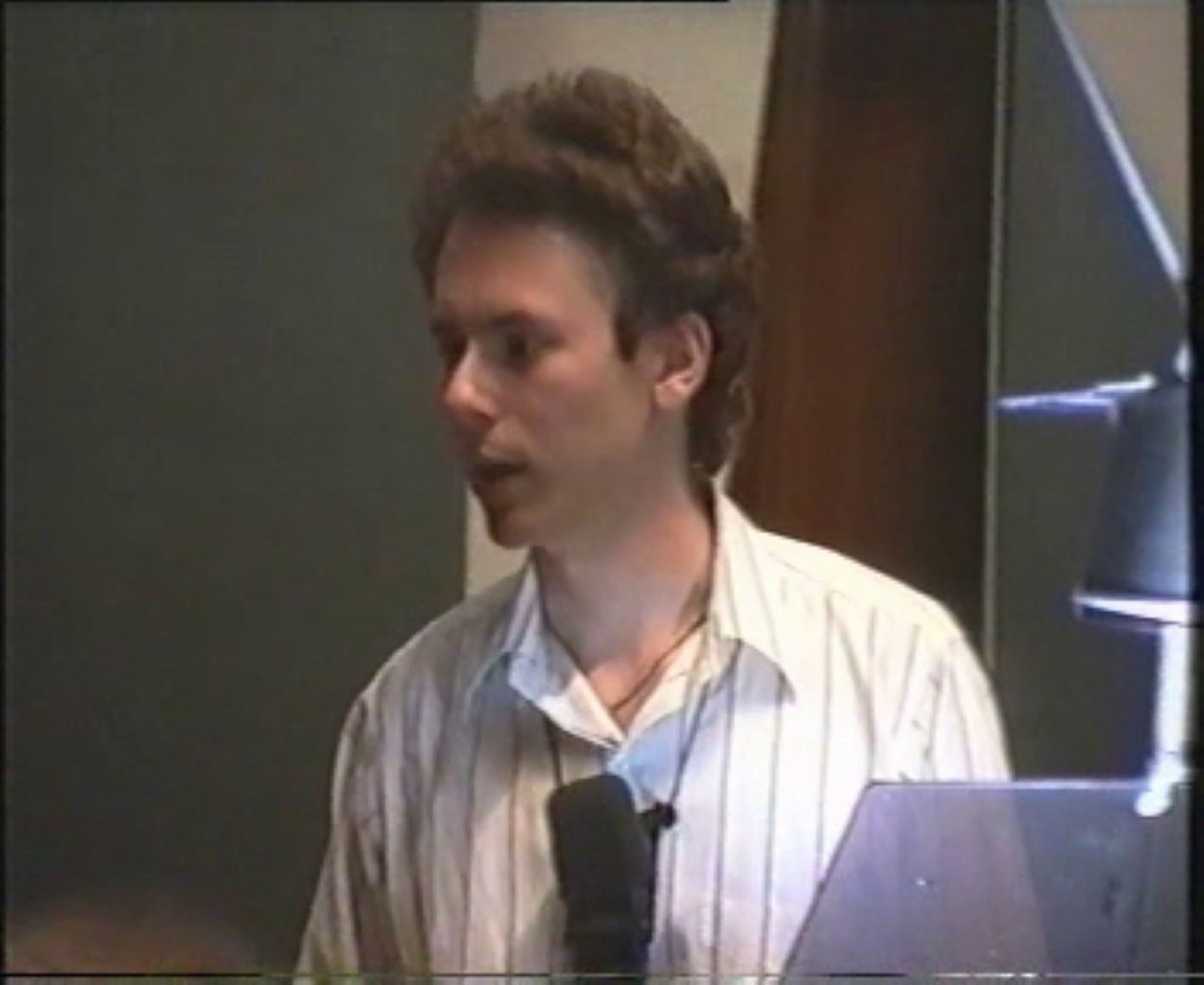 ”I collaborated on a project, the aim of which was to develop a new kind of particle detector, called the Microstrip Gas Avalanche Chamber, to be installed inside the DELPHI (DEtector with Lepton, Photon and Hadron Identification) experiment, one of the four main detectors at the LEP (Large Electron-Positron collider) particle accelerator. Not only did it need to be economical, but it also had to be highly accurate. This provided us with both theoretical and practical challenges. I worked hard to devise mathematical models to fit with the experimental data. Additionally we had to work with industry to develop new materials with specific properties. For instance, we liaised with a multinational glass manufacturer to develop glass with conducting properties and we succeeded! I felt an amazing sense of achievement!”

Alessandro’s contribution to the project was so crucial that he even saw his contract extended to enable him to complete his work.
Cultivating a taste for more

Alessandro’s summer student experience gave him the incentive to seek further opportunities at CERN. After a brief hiatus, Alessandro returned to CERN in April 1992 to work in one of the LEP experiments: DELPHI. As during his summer student period at CERN, Alessandro was thrust into teams of the most eminent physicists.

“I worked, amongst others, with such great physicists as Professor Ugo Amaldi (President of the Italian Foundation TERA), Tiziano Camporesi (former CMS Spokesperson) and under the directorship of Professor Carlo Rubbia. I view this period of my life with great affection; it was such a fantastic time, I truly enjoyed every single day at work and at that point, I couldn’t even imagine living my life any differently.”

Change is the only constant in life and after three glorious years at CERN, reality forced Alessandro to make some difficult choices. The Swiss scholarship from which he benefitted was replaced by an Italian one, with the impact of a much lower salary.

“At that point in time, I was wanting to buy a house, get married and start a family, so I needed to consider some practical aspects besides physics. Thanks to my skills in computer programming, which was also a hobby of mine, I had a number of ongoing consultancies with external companies so I switched my hobby for my job and physics became my hobby!”

From freelancer to General Manager

Alessandro returned to his native Italy in 1995 and began his career as a freelancer, working in the field of antenna design for broadcasting and telecommunications, and then combining his knowledge of physics and computer programming, he started developing software programmes for designing radio and television antennas as well as calculating the electromagnetic pollution of mobile antennas.
1999 saw Alessandro working in the company Diagramma s.r.l. (Diagramma is a software company based in Milan, the market leader in providing software solutions to national and international agents in the insurance sector), pursuing a newfound interest in the insurance market. He explains how he transitioned from the field of antennas for broadcasting and telecommunications to insurances,

“I started working on a project which made me very curious. I was tasked with developing some software which would enable people to enter their parameters related to car insurance online and obtain the best tariff. Nowadays, this is quite commonplace, but at the time, such software did not exist. I found myself in uncharted territory and encountered several challenges. To start with, none of the 60 main insurance companies shared their data easily, so I had to plough through all of the company literature and numerous tables to build an underlying algorithm, this was extremely time consuming. The second challenge was to understand the patterns behind the numbers.”

Despite the challenges Alessandro encountered, his first experience in the Insurance sector drove him to concentrate his efforts and develop more programmes for this market. Alessandro is now General Manager of Diagramma, the leading software house in the insurance market. Even though he had to make the tough decision to leave the field of physics and research, he is fully content with his professional choice, which also gave him the family life he sought. He is the proud father of two sons and physics remains a major interest of his. 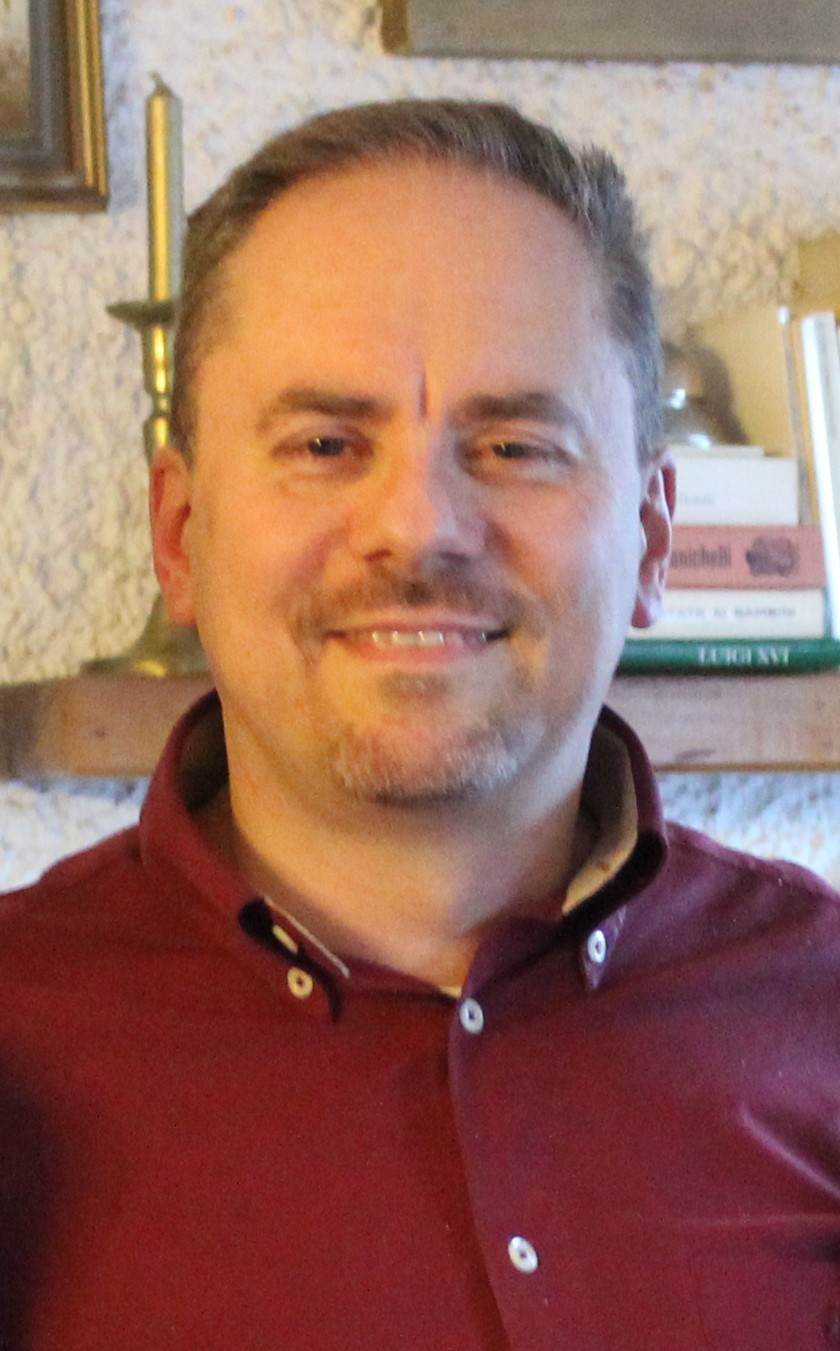 Diagramma currently employs 25 people and 5 external freelancers and is developing its portfolio with a focus on artificial intelligence. Currently, the company supplies software which uses AI to enable the programme to adapt to individual users and their usage of the platform. Alessandro describes further,

“AI in our software can easily reduce errors, by a factor of two or three as well as decrease input time to carry out certain repetitive, but low value tasks. This implementation is greatly appreciated by our clients. Previously, a specific programme and routine had to be developed for each customer, but with our software, the company itself can decide how the software should function. Initially we do supply some consultancy to companies using this specific software for a period of approximately three months. It can depend on the complexity of the software, but in the long run, such applications, save both time and money.”

What is an experience at CERN worth?

Whilst it is clear that Alessandro enjoyed his time at CERN thoroughly, I am curious to understand how working as a physicist can equip someone for their future career development outside research.

“I certainly learnt a lot from my time at CERN which I am sure I wouldn’t have acquired elsewhere. I recall I had to deal with various problems and unforeseen situations, challenges which I needed to solve quickly and effectively. Such challenges were born out of the unique work we carry out at CERN, pushing forward the frontiers of science. It wasn’t enough to know the physics and think logically, I also had to think differently, laterally one could say. I learnt how to solve problems using an innovative approach. All this was taking place in an international environment, rich in cultural exchanges. Last, but by no means least, my experience at CERN enabled me to work shoulder to shoulder with some of the greatest names in particle physics, I was thrust into an arena of erudite, intelligent, top-ranking physicist, which was remarkable, being at the beginning of my career.”

Alessandro leapt at the chance to join the CERN alumni network and the recently launched CERN Alumni Milan-Turin group. Indeed I had the pleasure of first meeting Alessandro at the kick-off event for this group back in October 2019. He explained his reasons for signing up and becoming a member of the network,

“Principally I want to stay connected to CERN, keep up-to-date with its science and even take advantage of the possibility for CERN alumni to come back and visit. I am also very much interested in using the CERN alumni platform to recruit from within the CERN Alumni talent pool. Having worked at CERN, I know how multi-talented these people are and I am very keen to employ such talent in my company.”

Finally, despite the fact that Alessandro hasn’t had the opportunity to return to the Lab since he left in the 1990’s, he is excited by the prospect of Science Gateway [https://sciencegateway.cern/],

“I will most definitely pay a visit to CERN to visit Science Gateway, not only because it is designed by the renowned Italian architect Renzo Piano, but also because CERN played such an important and gratifying role in my early career and I want to share this with my family.”

We look forward to welcoming you back soon Alessandro!

Weekly News - Dealing with confinement, tips from an astronaut!