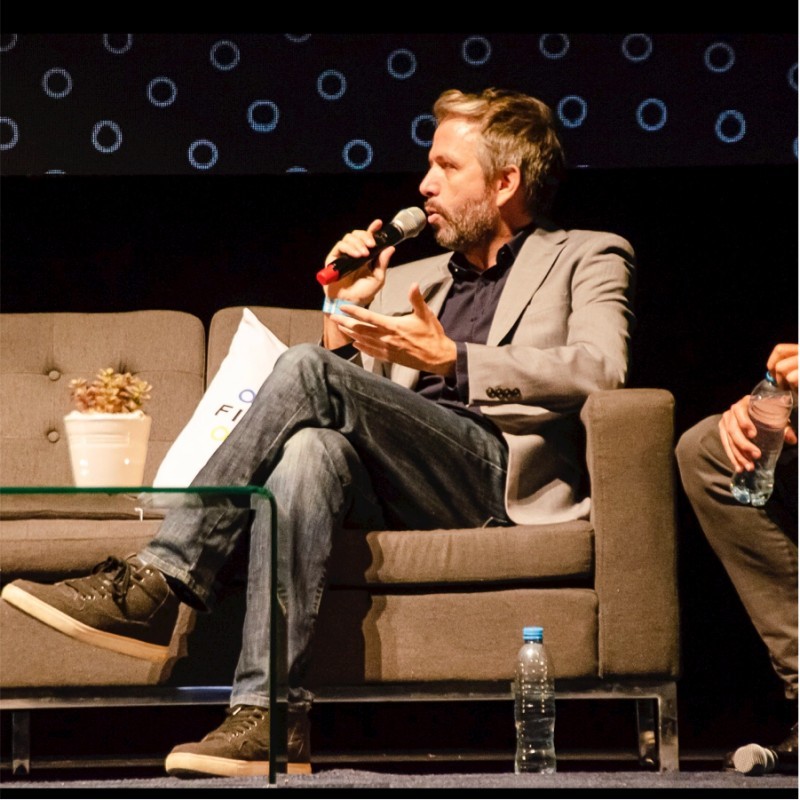 CERN Alumnus: Julio Pernía Aznar
At CERN: 2002-2003 as an associate for the IT Department
Now: Co-founder & CEO of Bdeo

I e-met Julio in the midst of the COVID-19 confinement measures, at the time we were both working from home. Having to organize the operation of three companies accordingly, he has a lively interest in the topic.

“I find it fascinating to watch how companies continue to adapt to this new reality despite many having already offered working remotely. At my company, as well, our staff had the option of working from home even before SARS-CoV-2 changed the world—so we are in a way already familiar with it, though certainly not on this scale—but many of our clients, some of whom happen to be large multinationals, seem not to have been particularly accustomed to fully-remote meetings, for example. I think that this new reality will trigger even greater changes at companies, operationally in the next few months.”

This said about COVID19, let us go back to the beginning.

An early interest in science

Born and raised in Madrid, Julio developed a keen interest in physics and astronomy at an early age. His father, being an engineer, influenced young Julio, who studied telecommunications engineering from 1996 to 2001 in Madrid. After finishing his degree, Julio wanted to gain international experience, so he started exploring how to be awarded with a public scholarship. He applied to several programmes, including a collaborative scholarship agreement between the Spanish government and CERN, and much to his surprise, his application was successful.

Actually reaching CERN turned out to be a real adventure in itself, as Julio drove 1,400 kilometres from Madrid to Geneva. His car broke down just before reaching Lyon, and since he did not speak any French at the time, he had to face his first real international challenge earlier than expected. After having his car repaired, he finally arrived at CERN to face even bigger challenges.

"When I started at CERN I did not know how to code in Python, so I had to learn from scratch. Even though today Python is one of the most popular programming languages, at the time there were just a handful of people using it at CERN. In the beginning, I was working for CDS (CERN Document Server), which at the time was under the Education and Technology Transfer Division (ETT). Later on, I asked my supervisor to be involved in a radiation or semiconductor-related project at the same time, if possible. I thought that being at CERN was a unique opportunity to learn more than just programming. My boss agreed and I started working

part-time for the COMPTON camera project, where I was a research assistant helping to measure gamma radiation in silicon semiconductors. I learnt a lot from both projects I worked on and I am grateful that I managed to have this double experience within a relatively short period, but what amazed me the most about CERN was the collection of brilliant people you get to meet there. There were days that while having coffee at the cafeteria, I was thinking that a Nobel Prizewinner might be sitting next to me. There are not many places like that on earth.”

Rediscovering his own country

Besides working in an international environment and learning technical skills, Julio ended up discovering many details about his own country as well.

“I was actively involved in the Spanish community, even though I later realized that this was not optimal for developing my French. At CERN, I rediscovered my own country to a certain extent. I was interacting with people from Galicia, Murcia, Barcelona, and Valencia, and I got to know not only Europe but Spain from a different angle from the Spain I was familiar with whilst living in Madrid.”

Even though the scholarship was a two-year programme, Julio decided for personal reasons to leave CERN after about a year and return to Madrid.

“I managed to get my first job back in Madrid thanks to my CERN experience. I had an offer from Bell Labs, an industrial research and scientific development company where my position combined programming in JAVA and Python. As I mentioned, at the time there were only a handful of people who knew how to programme in Python so my skillset was much needed. Most importantly, it was during my time with Bell Labs that I met my future business partner. Today we co-own three companies.”

Julio worked for Bell Labs for about a year and a half before moving to Telefónica, a Spanish telecommunications provider, where he spent another year programming mostly in JAVA. His next stop was AENA, a state-owned company responsible for regulating European aviation. This is when he jumped into the managerial side of business providing mostly consultancy to interested parties.

The call of entrepreneurship

After spending a year and a half at AENA, Julio decided to take the big step of starting his own business.

“I have always liked aviation; I had also acquired my pilot’s licence while studying for my degree in Madrid, allowing me to fly any kind of aircraft weighing under 2,000 kilos. At the time, my parents advised me against leaving my job, telling me: ‘You have a good salary, you get to travel a lot, which you love—your job seems perfect. Why would you quit to create your own company? Why do you want to move to something that you have no resources to support?’

As I had always wanted to create my own project and be an entrepreneur, I decided it was the right time to begin a new adventure.”

Noaris, Julio’s first company, was launched in 2006 with few resources, as he was about to face yet another difficult beginning.

“When we started consulting there were more challenges than I can remember. My business partner and I were not able to pay ourselves for quite a few months, and even had to borrow money. Then the 2008 financial crisis hit. By then we were fortunate to have had several customers and were able to cope and survive. I am proud to say that during that time and since we have been fortunate not to have had to ever miss paying any of our employees.”

After overcoming a rocky start, Noaris started gradually performing better (as of today the company employs 12 people) and began developing a SaaS (software as a service) product that provided intranet to, mostly, small and medium-sized businesses. Due to the variety of Noaris’s client base, a new business opportunity soon emerged.

“One of our clients was a football club, Villarreal, who are renowned for their novel way of managing their club. In 2011, while developing Villarreal’s SaaS platform, we researched the market and realized that there are no companies specifically targeting the football market, so we decided to create a brand, and this turned out to be a separate company. This is how Director11 began. It is a SaaS platform for the comprehensive management of football clubs, allowing for the organization of tasks, events, and information from training systems, to nutrition, to residency—anything related to the management of a football club.”

Today Director11 comprises 14 employees, provides services to more than 50% of all football clubs in Spain and has several customers in Europe, like Olympique de Marseille, Real Madrid, FC Barcelona as well as clubs in Mexico and Colombia.

Besides football clubs, some of Noaris’ clients are insurance companies. Again, a different opportunity came up in a very different industry and Bdeo, Julio’s third company, was launched in 2017.

“The staff of Noaris currently work on a SaaS product for the insurance industry. As we developed that product it gave us insight into certain specific needs of insurance companies, and we launched Bdeo. Bdeo helps insurers manage claims by speeding up the underwriting and claims process using artificial intelligence and deep learning. The big difference between Bdeo on the one hand and Noaris and Director11 on the other was that we had used our own resources for the latter. With Bdeo we had to take a different approach. We realized we had a need for a financial boost from investors to meet our expectations regarding both the scale of the project as well as the speed of progression. It is our biggest company, as we employ a staff of 30, and we have both Spanish and Mexican investors."

Whilst Julio owns and oversees all three companies, he is currently focusing on running his most recent project, Bdeo.

The power of networks

Apart from acquiring programming language skills, which is a very valuable skill, working at CERN has helped Julio in a variety of ways.

“People are often impressed if they find out that I had the privilege to work at CERN. Besides the prestige that comes from having had the chance to gain professional experience at CERN, I developed a very useful network to draw upon. Many of these individuals have helped me throughout my career, as both friends and mentors. Even though I joined the CERN alumni network relatively recently, for me it has existed for a while informally, as I am fortunate to still have many CERN alumni connections in Spain. The CERN alumni network is a great initiative for people who want to be in contact with other alumni after leaving CERN. More specifically the alumni platform provides me with access to a pool of talents with very specialized skills. Currently Bdeo is growing and I would be delighted to help fellow alumni coming from CERN find their next job on the alumni.cern platform. Thank you very much for having given me the opportunity to speak with you!”

Anytime Julio, please do post your opportunities at https://alumni.cern/opportunities/new!