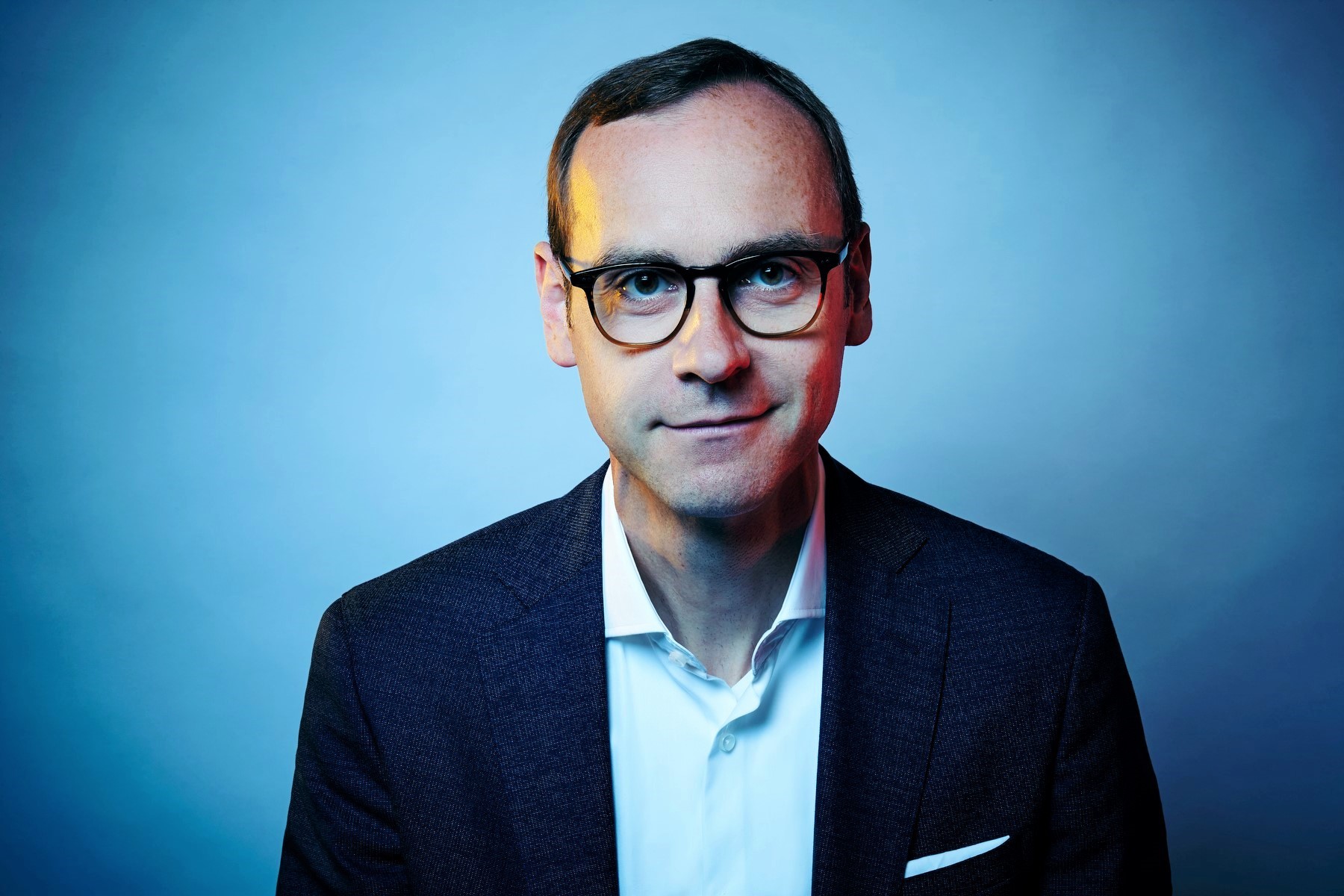 “I am a proud ambassador of CERN; it’s one of the greatest places on earth” declares Markus Pflitsch, whom I met, as is the current trend, via a popular video conferencing platform, during the COVID-19 confinement. As is the case for numerous CERN alumni, Markus’ first experience with the Organization was as a summer student, in 1996. Since leaving, his trajectory has taken him on a professional odyssey, from academia to banking, via consultancy and now entrepreneurship in the innovative field of quantum computing.  On the day of writing this article, his company Terra Quantum announced via press release that they had raised 10 million euros to advance the European quantum tech ecosystem! But, where did it all start?

Markus’ passion for science was stoked at the early age of 14, when he read physicist John Gribbin’s 1984 book on quantum theory, ‘Schrödinger's Cat: Quantum Physics and Reality’,

“My mind was blown when I read that book and it provided me with the impetus to pursue my studies in science and in particular physics. But not only that, I have always been fascinated by the bigger philosophical and more existential questions, which physics can answer.”

Fast forward to 1992, Markus enrolled for a Bachelor of Science in Physics and a Bachelor of Science in Mathematics at RWTH Aachen University (Germany), which he followed up with a Master of Science in Elementary Particle Physics and Quantum Physics. At his Professor’s suggestion, (Prof Bethke) Markus joined CERN as a summer student in 1996. During his internship, he worked in OPAL, one of the four large collaborations on the Large Electron-Positron collider (LEP). Markus explains with a broad smile,

“Big data is one of today’s buzz words, but back then in 1990s we were already analysing petabytes of data. It was such an exciting time, also considering that the World Wide Web was in its infancy. I recall being based at Aachen and receiving data from the web to work on, it was incredible. By the way, I am still a proud owner of my “CERN, Where the Web was born” t-shirt”.

Markus’ firm attachment to the Organization was born out of his highly rewarding time as a summer student and further rooted thanks to his subsequent experience as a research scientist. Nevertheless, Markus reached a crossroads in his life. The pull towards continuing in research was strong; however, Markus opted for a different path,

“At the time, my feeling was, if I go into research, I will plunge myself fully into it and allow myself few other distractions. At the same time, I was eager to discover other professional challenges and what they had to offer. I was interested in having a business career and I wanted to broaden my horizons.  Therefore, I accepted an internship with the Boston Consulting Group (BCG). On my first day I found myself surrounded by Harvard MBAs in sleek suits, wondering what we would have in common.”

New challenges across the pond

Indeed, I was curious to discover why a CERN professional experience and the international and robust profile it moulds makes people from CERN highly sought after candidates; I asked Markus his opinion on the matter,

“I think there are two very clear reasons why companies are so keen to employ people from CERN. Number one, you develop extremely strong and structured analytical skills and this is coupled with the second reason:  a CERN experience provides you with a deep passion to perform.”

At BCG, it was noticeable from the outset that the corporate world enjoyed a more stripped down bureaucracy, compared to academia. Resources were somewhat freer flowing too; Markus was surprised to receive a top-of-the-range IBM laptop, a Blackberry and business class flights, even as an intern! During his four years at BCG, as project leader, Markus concentrated mainly on strategy consultancy. Based in Toronto, Canada, the market endured turbulent times, with the bursting of the dotcom bubble; a precursor and perhaps an omen to a future episode in his career? In 2001, Markus headed back to Germany, beginning a new phase in his life, taking on the role of Director of Corporate Development with Deutsche Bank.

Markus enjoyed a meteoric rise during the ensuing years, gaining more seniority in the world of finance, yet he still held on to his physicist’s quest for truth and answers to the more philosophical questions. From Deutsche Bank, he moved to UniCredit /HypoVereinsbank, as Managing Director, then in 2005, and then to LBBW (Landesbank Baden-Württemberg), first as Head of Corporate Development and subsequently CEO of LBBW Immobilien GmbH where he oversaw its restructuring.

The global financial crisis in 2009 was a turning point in Markus’ professional career as he felt himself pulled to take on more entrepreneurial responsibility in comparison to being just a high-calibre employee, so he decided to leave the banking scene.

As one door closed in Markus’ professional life, he applied his acquired skills and expertise in a variety of different sectors. From finance, he segued into marketing, becoming CFO and Managing Director of Avantgarde, the leading global brand experience agency. After six successful years with the agency, he was pulled in as Board Member and CFO to support the restructuring of one the biggest global antenna and communications companies. After a successfully stint, Markus decided it was time for some major life changes. He took three consecutive months off work and found a passion for hiking.

“After many hectic years dedicated to my professional life, I finally took the time to slow down. During my time off, I took to hiking about 30 to 40 kilometres per day in the countryside close to my house. I really enjoyed the simplicity of it, encountering fellow walkers and engaging in pleasant conversation with them.”

I wondered which direction Markus’ career took following this hiatus, which sector of activity would he aim for?  From an early age, Markus has been fascinated by science and life’s existential questions. Coupled with the fact that Markus has a strong entrepreneurial streak and that he is co-owner of a large German multi-family office and senior advisor to private equity funds; perhaps the only natural path was to found his own company in a cutting-edge, deeply technological sector; quantum computing.

… and back into the thick of it

In 2018, Markus founded Terra Quantum, which is a deep tech pioneer, developing revolutionary quantum applications to shape the technology of the future. I ask Markus to explain his company’s mission and composition:

“Terra Quantum is the European answer to breakthrough and accessible quantum computing technology. While companies like IBM, Microsoft and Google are racing to build reliable quantum computers, the European quantum ecosystem is still in the beginnings. We are deep tech pioneers who want to contribute substantially to the European ecosystem. We can already show results through our world-class expertise. The Terra Quantum research team has realized a hybrid quantum algorithm for solving a linear system of equations with exponential speedup that utilizes quantum phase estimation - one of the exemplary core protocols for quantum computing.”

Markus adds that his company has raised total funding of 10 million Euro from various investors bringing the company's valuation to around 50 million Euro. The impact of quantum computing is predicted to be huge in many industries, including pharma, automobile, aviation and artificial intelligence and is likely to change our lives profoundly.

Alongside his activities within Terra Quantum, Markus is heavily invested in the German entrepreneur ecosystem, thanks to which he recently had the opportunity to come back to CERN. Just over twenty years since leaving CERN, Markus returned with a group composed of some of the most influential German business leaders, with the Baden-Baden Entrepreneur Talks group[1].

“Back in January of this year, I brought 70 entrepreneurs to CERN.  They were blown away by their visit and by CERN’s cutting edge research.  Not only were they impressed that CERN is seeking answers to the most profound and relevant questions but the sheer scale of project management of such a gigantic endeavour left them in complete awe. After the visit, they told me that the humility and openness of those working at CERN was remarkable.  CERN is truly an emblem of ‘Science for Peace'”.

Clearly, Markus feels a profound attachment to CERN. “CERN gave me so much!” Realising early on in his career the power of networks and how being connected can aid in, amongst other things, securing one’s desired job, Markus is a seasoned networker. Without hesitation, he became a proud member of the CERN Alumni Network, therefore opening up an exclusive community of CERN Alumni with similar professional interests. He also reveals that he is in close contact with the CERN Entrepreneurship team, in the Knowledge Transfer group.

The pride of returning to Science

Our conversation closes with me asking Markus what he is most proud of in his impressive career. With so many successes to choose from, he replies without hesitation,

“It’s definitely founding and building Terra Quantum. I created this company out of nothing and have brought together an amazing team of international experts. We are building quantum technology for a better future, breaking down the barriers between science and industry and laying the foundations of a real quantum tech ecosystem and value chain. Quantum physics has for decades been at the very core of my ultimate interests and bringing real world Quantum applications to life is a thrilling prospect.”

Thank you Markus and we look forward to keeping in touch and hearing how Terra Quantum flourishes in the coming years!

[1] The “Baden-Baden Entrepreneur Talks” (BBUG) is considered the most important and most highly profiled German institution to further the personal development of the next generation's executive leaders. [https://www.bbug.de/en/]