An insane amount of knowledge 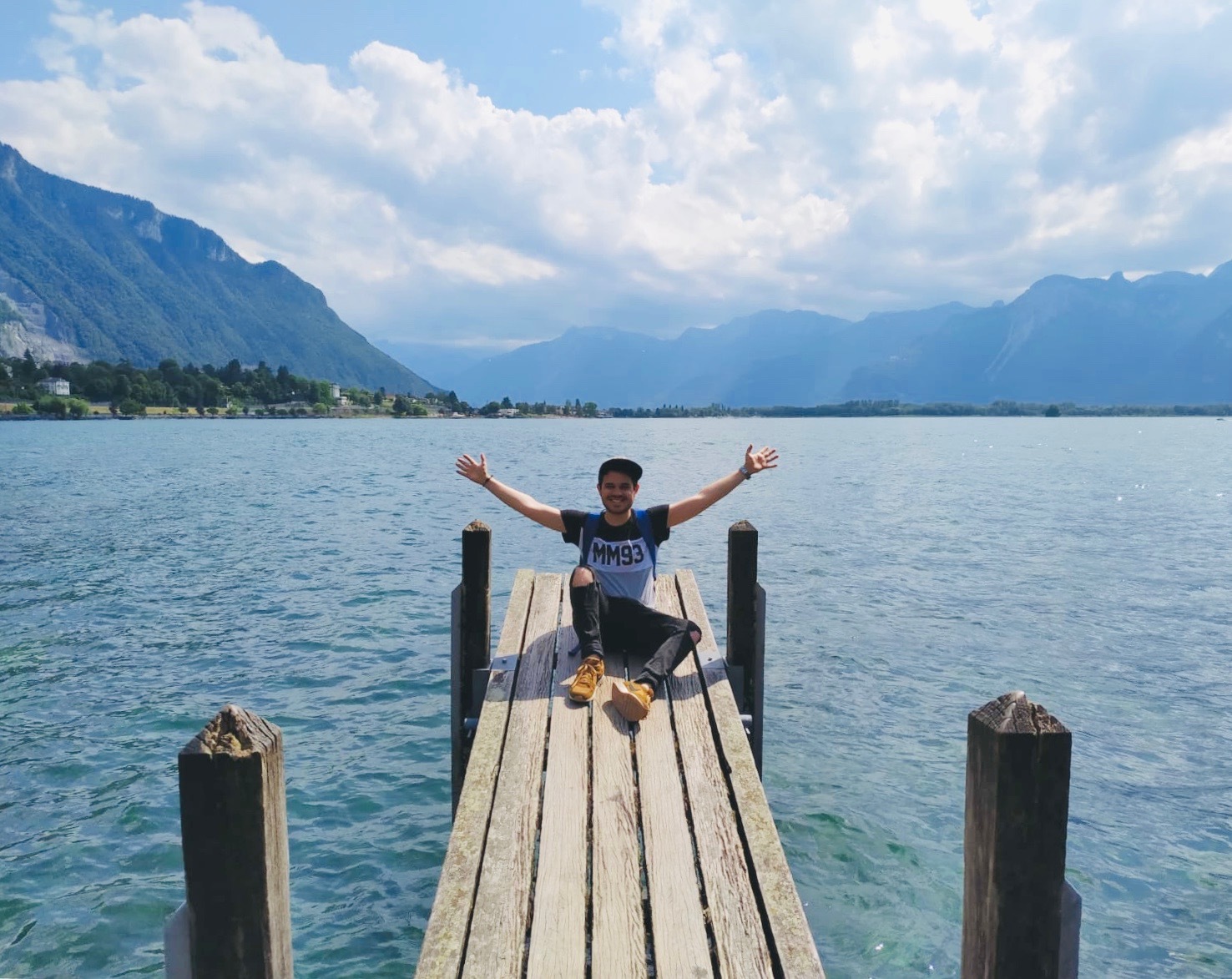 Adrian: I first travelled to CERN on Saturday, June 8 of 2019, Monday, June 10, was the Whit Monday, regional holiday in the canton of Geneva, so I enjoyed fooling around and learning more about the area where I was going to spend the following 3 months of my life.

At CERN, as part of the Summer Student programme, I was a member of the Beam Instrumentation (BI) group, which designs and takes care of the instrumentation that measures the characteristics of the particles beam during its trip in the accelerator complex. Although the group is mainly composed of engineers, computer scientists and applied physicists, I was assigned to this group to do a completely different job from what one might expect: Developing a video game!

My CERN project was to develop a video game where I had to illustrate in a simple, interactive and entertaining way, the role and the importance of beam monitoring instruments in a particle collider as the Large Hadron Collider (LHC). The video game was part of the BI group CERN Open Days 2019 tent between September 14 and 15. 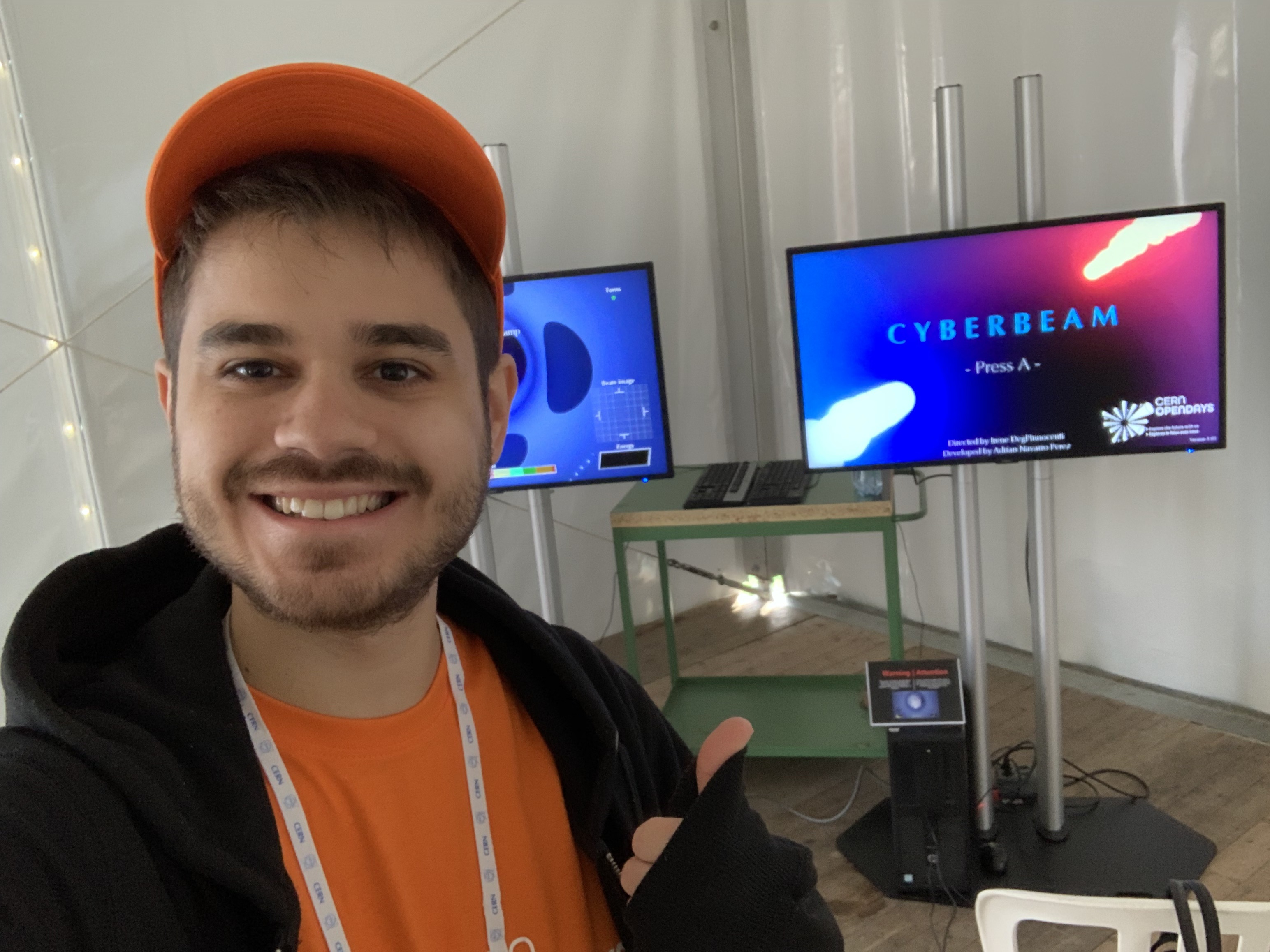 Adrian: Spending three months in a place like CERN, tons of good memories worth remembering are guaranteed. Nevertheless, there is one memory, which stands out. Once I finished my Summer Student programme by the end of August, I had to resume my studies in Sweden. However, the CERN Open Days 2019 event was being held between September 14 and 15, a couple of weeks after the termination of my CERN contract. Because I had worked hard all the summer to develop the video game, I decided to fly back to Switzerland to volunteer as an activity host for my own video game during the event.
Spending two days in a row next to my game’s booth, after a long flight and almost without taking any break was hard and exhausting. However, watching how people of all ages were playing and enjoying my game, and observing how a feeling of learning science was awakening inside each player, was extremely rewarding for me both personally and professionally. Some people were staying in the booth for one hour straight, just playing or fooling around. Some other people asked me many questions regarding the process, which is showcased in the game. In addition, some others, mostly children, would come back twice and even three times to play the game in a single day. 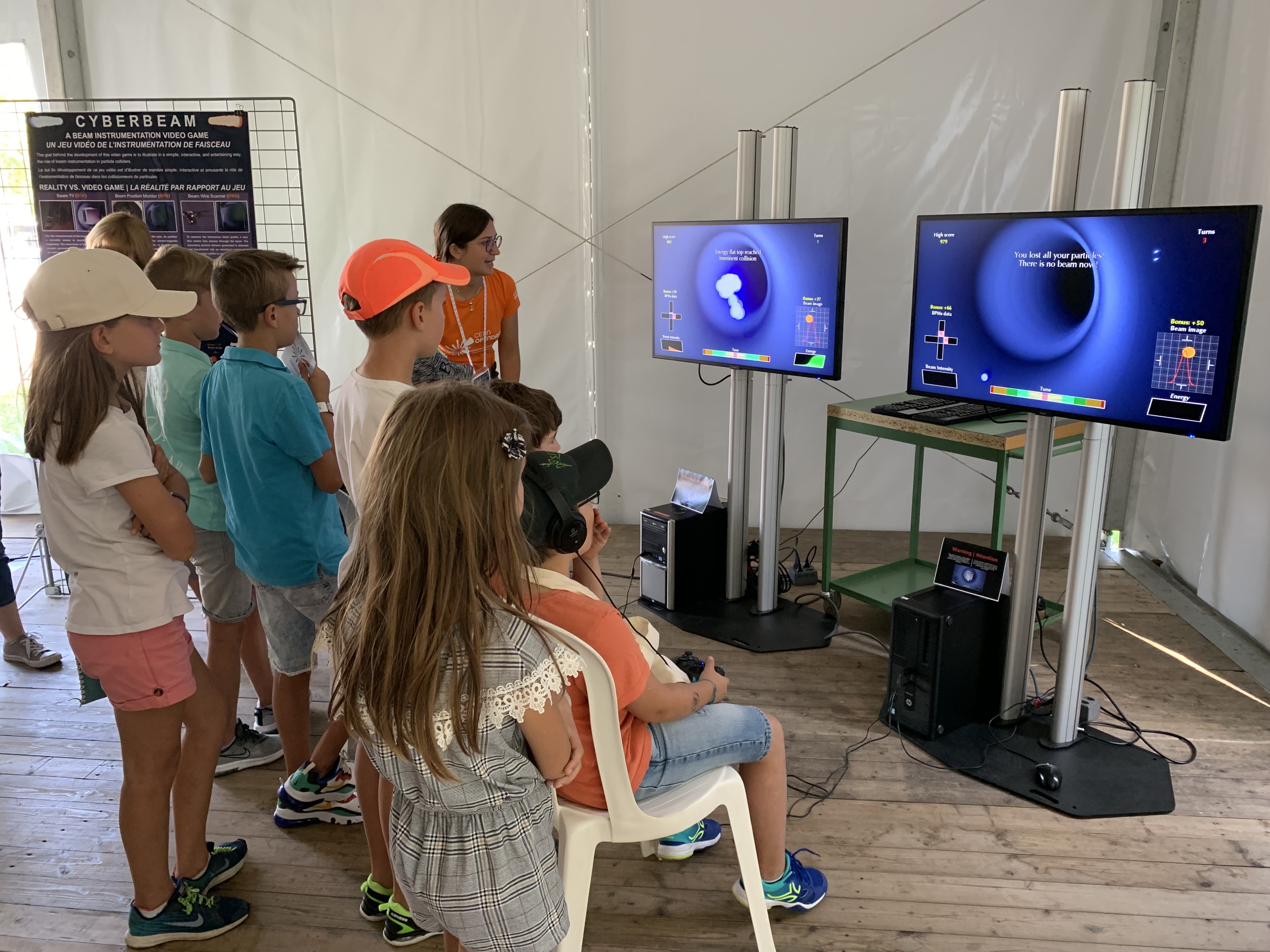 Adrian: Right now, I am living in the city of Gothenburg, in Sweden, where I am about to finish my two-year Game Design & Technology Master’s Programme. Soon I will present my master thesis, Game Design and Implementation of Physics-Based Interactions between Player and Environment Elements, which I have been working on for the last 5 months. As part of this master thesis, my master thesis colleague and I have tried to ease the work of game designers when dealing with physics-based games, by creating and providing a formal method that guides the design and analysis of physics-based games.

Adrian: Although I learned many things at CERN, both from my colleagues and friends, there is one skill which stands out, even if CERN is a place far from my field of study. When designing games, game designers need to understand the world that surrounds them and how it works. This includes fields of study where they have no proficiency. In my case, understanding how particle physics, particle beams and particle accelerators work was really tough to grasp.
Learning a large amount of theoretical and practical concepts and applying them correctly into the game so it would represent reality with a certain degree of accuracy, was the true challenge of my Summer Student experience. Luckily, I had a wonderful group of colleagues next to me who helped me out in this regard. By the end of the summer, I was able to finish the game, which would help people understand the process behind colliding particle beams, rather than only just having fun with yet another game.
Therefore, I honed the skill of facing the unknown when designing a new game, and I am absolutely convinced that this experience will be priceless in the near future.

Adrian: For sure, even though I have learned a lot from game development throughout the CERN Summer Student programme, I still have a lot of room for improvement in many ways. For example, I would like to keep improving my programming and scripting skills when developing games even though I prefer to design them. As a game designer, it is important to know about all the fields involved in game development, such as programming and scripting, sound design, quality assurance…

Adrian: Absolutely. I have thought about this many times. If I have been able to go to CERN as a game designer and I have acquired an insane amount of knowledge despite my field of study being completely different to CERN’s anyone can do the same. Furthermore, the number of friends you make, the great memories you create and how much you expand your mind both personally and professionally, are worth giving it a try.

Adrian: To my younger self I would definitely give the advice of taking advantage of every single opportunity that is presented. When I was younger, while studying my bachelor’s, I did not attend any extracurricular activities or whatsoever and I did not complete any internship. I was lacking interest. This was obviously a mistake as I discovered later on, because I had no professional experience and I did not participate in any projects out of class. It was not until I participated in the Erasmus+ Studies Programme at the age of 20, when I realized how important is both for your personal and professional growth to be proactive and giving it all at all times. Luckily, when an opportunity like CERN came up, my attitude did change and I gave it all, producing a set of results I am proud of and which have helped me to get more opportunities, some of which are yet to come.

OAR: Do you still follow up on what is going on at CERN?

Adrian: I actually enjoy following CERN as much as I can via social networks and my ex-colleagues (now friends) from my time there. Even though I had always admired CERN, once I had started working my admiration increased for what is done within its walls.

Adrian: Nowadays, networking is a very important activity in order to keep in contact with your old friends and colleagues as well as reaching new potential connections and meeting new interesting people. The CERN Alumni Network creates the perfect environment to support all this. However, what makes it so special is not just supporting what I have just mentioned, because any social network is able to do so. What makes CERN Alumni Network so special is that it helps to create a community thanks to the news, jobs and events that are regularly published, the multiple benefits it offers, as well as how accessible all the information is to everyone. For sure, making a good use of CERN Alumni Network helps you to stay close to CERN as if you have never left. 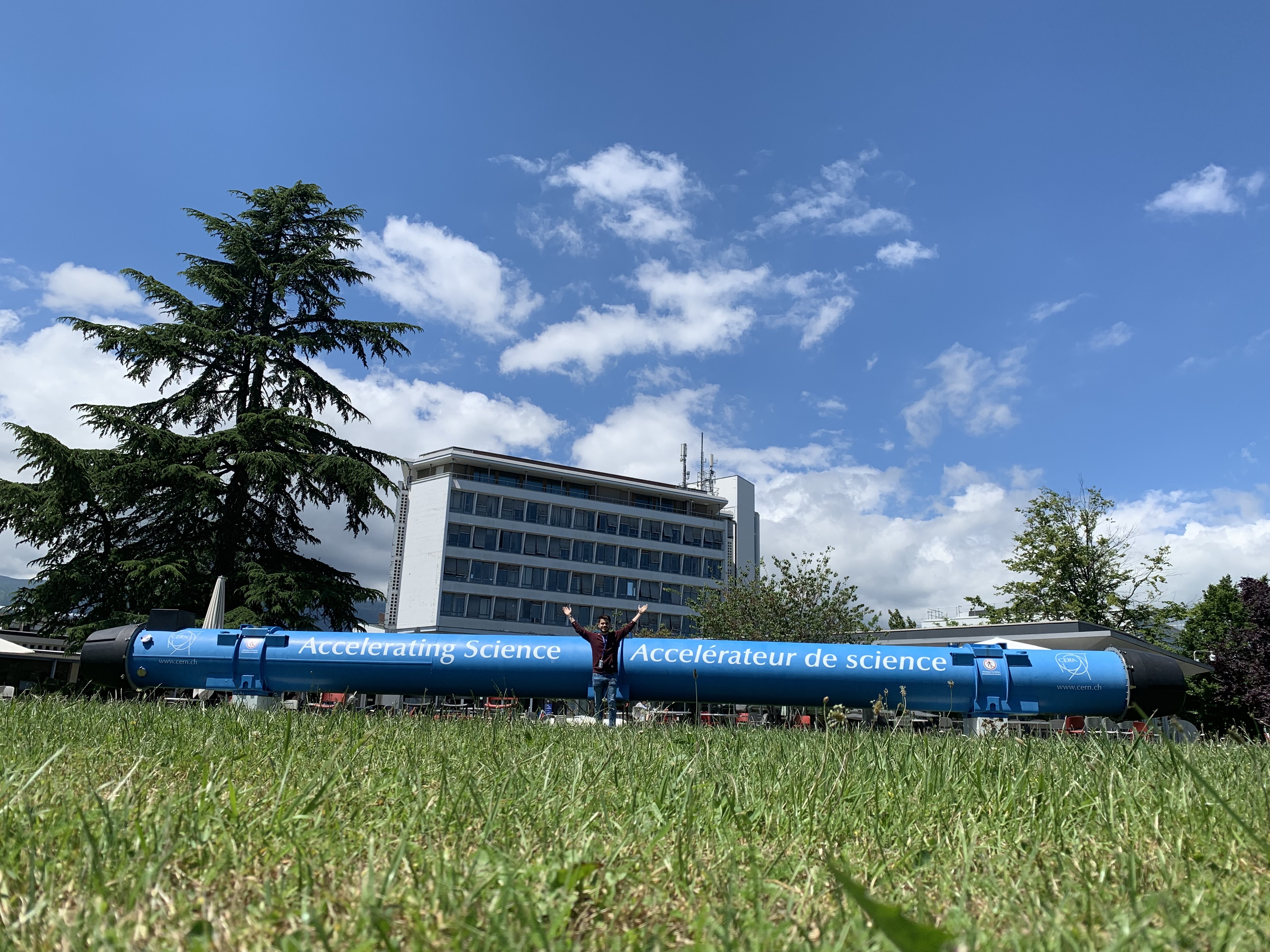 Adrian: I would say that my proudest achievement is the one that I have not achieved yet. Being able to never give up, being able to embrace failure no matter what, is what is really important for me. In 2017, before getting the opportunity to work at CERN, I tried to participate in the CERN Summer Student programme but I was not successful. However, this never stopped me from giving it another try. Thanks to this behaviour, I got it on my second try, which is not less meritorious than being successful at the first time.

Thank you very much Adrian, we wish you all the best in your future professional trajectory !