My best experience as a summer student? The scientific pampering! 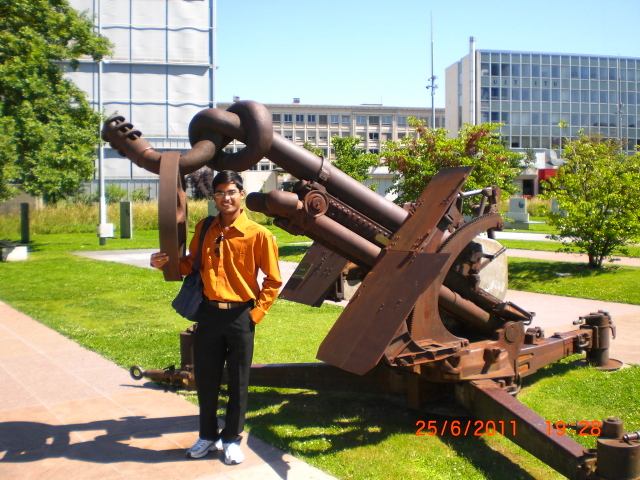 OAR: When did you come to CERN as a Summer Student and what did you work on?
Akashrup: I was a part of the 2011 CERN Summer Student program. My project was related to the CMS group (with Dr. Archana Sharma), where I contributed towards building the Cosmic Muon Stand.

OAR: What is your best memory of working at CERN?
Akashrup: The best and possibly most exclusive privilege of being a CERN Summer Student is the scientific pampering we receive! Every scientist and researcher is available at any time for short discussions, and we can basically bounce the stupidest ideas in our head off them. My best memory has also got to be meeting Prof John Ellis (!!!) in the corridor and getting invited to his room, just to have a chat. The first half of that chat is a clear blur for me and the latter half a distinct euphoria. It took me a long time as a 22-year old to realize scientists can be so approachable and that they can possibly talk about things other than science. We spoke about India, and his previous engagements with my country of origin, all the while being the best listener to what I had to say regarding the way India benefits from being a CERN member. He topped off the meeting by asking a person passing by to click our picture. Not just at CERN, that stays with me as one of my best memories, till date!.

OAR: What are you currently doing and where are you located?
Akashrup: I am a Nuclear Scientist at GSI, working as a postdoctoral fellow with the Gamma Spectroscopy group. My assignment is at Darmstadt, Germany where I have been stationed for more than a year, now.

OAR: What skills did you develop during your CERN Summer Student experience which have been particularly useful in your subsequent career trajectory?
Akashrup: Being a part of a family like CERN gives you tremendous exposure. I went to CERN at the cusp of my scientific career, and when I was completely confused about what to do after my post-graduation. The experiences gained at CERN gave me two skill sets- which I will carry with me forever. The first was to work in a large multinational collaboration, where members don't care about where you come from or what your ethnicity is. The feeling of belonging, despite being over 7,500 km away from home was unique and beautiful. The second skill set was obviously experimental techniques. When we work with the best in the field, it rubs off onto you, even if you don't want it! The same happened with me and the experimental aptitude that I began developing while at CERN will stay with me forever. I was lucky to have a dream beginning to an experimental physicist's career!

OAR: What skills did you need to develop further when you left CERN to face your next challenge?
Akashrup: Once the CERN Summer Student programme was over, what I knew was that I definitely wanted to become an experimental Physicist! With my foundations of experimental approach being laid by CERN, honestly the road after was much easier. The conclusion of the CERN Summer Student experience was just a beginning for me in terms of learning- because there is just so much to learn out there! A few lessons I learnt as a young student after leaving CERN was to become more patient and that failures are not an end! In fact, I pass these on to younger students who I see get restless and desperate for success.

OAR: Would you recommend the CERN Summer Student programme to other people?
Akashrup: ABSOLUTELY. I will not add a word to that response!

OAR: What advice would you give your younger self?
Akashrup: That knowing how to cook can be a very useful skill!

OAR: Do you still follow up on what is going on at CERN?
Akashrup: Yes, it is always exciting to see what CERN is doing. Scientifically and socially. What I have always felt is that the scientists at CERN understand their social obligations very well. Besides performing exciting scientific research, they are committed to social causes. It is also very encouraging to see the way CERN tries to attract the younger generation and groom them as successful researchers. It always brings a smile when I read stories about CERN, because I can so well relate to them. Sweet nostalgia!

OAR: In your opinion, what is the unique value of the CERN Alumni Network?
Akashrup: The CERN Alumni Network is doing a super job. One evident example is myself- taking time off my busy schedule at GSI to write about my experience as a CERN Summer Student. The CERN Alumni Network has the power to make someone feel connected even after almost a decade of being at CERN! It is very important for the alumni to give back to CERN, by ways of spreading the word about the great work being carried out. This is the least we can do, and CERN Alumni Network deserves the credit for providing a platform.

OAR: What is your proudest achievement?
Akashrup: On July 4, 2012, when the Higgs Boson discovery was announced to the world, I was sitting with 20 Nobel Laureates in Physics at Lindau. The people on screen making the announcement, I could proudly say, were people I had worked with. The people I was sitting around with, well, they are the best in the world. My attendance at the Lindau Meetings (and a successful Lindau Alumni Peer-Reviewer) would not have been possible, were it not for CERN.
So, my proudest achievement will always receiving that email informing my acceptance into the CERN Summer Student. Whatever I achieved after that, and will, would be in some way related to the work I did at CERN, and the friends I made there!