I know that I am very lucky 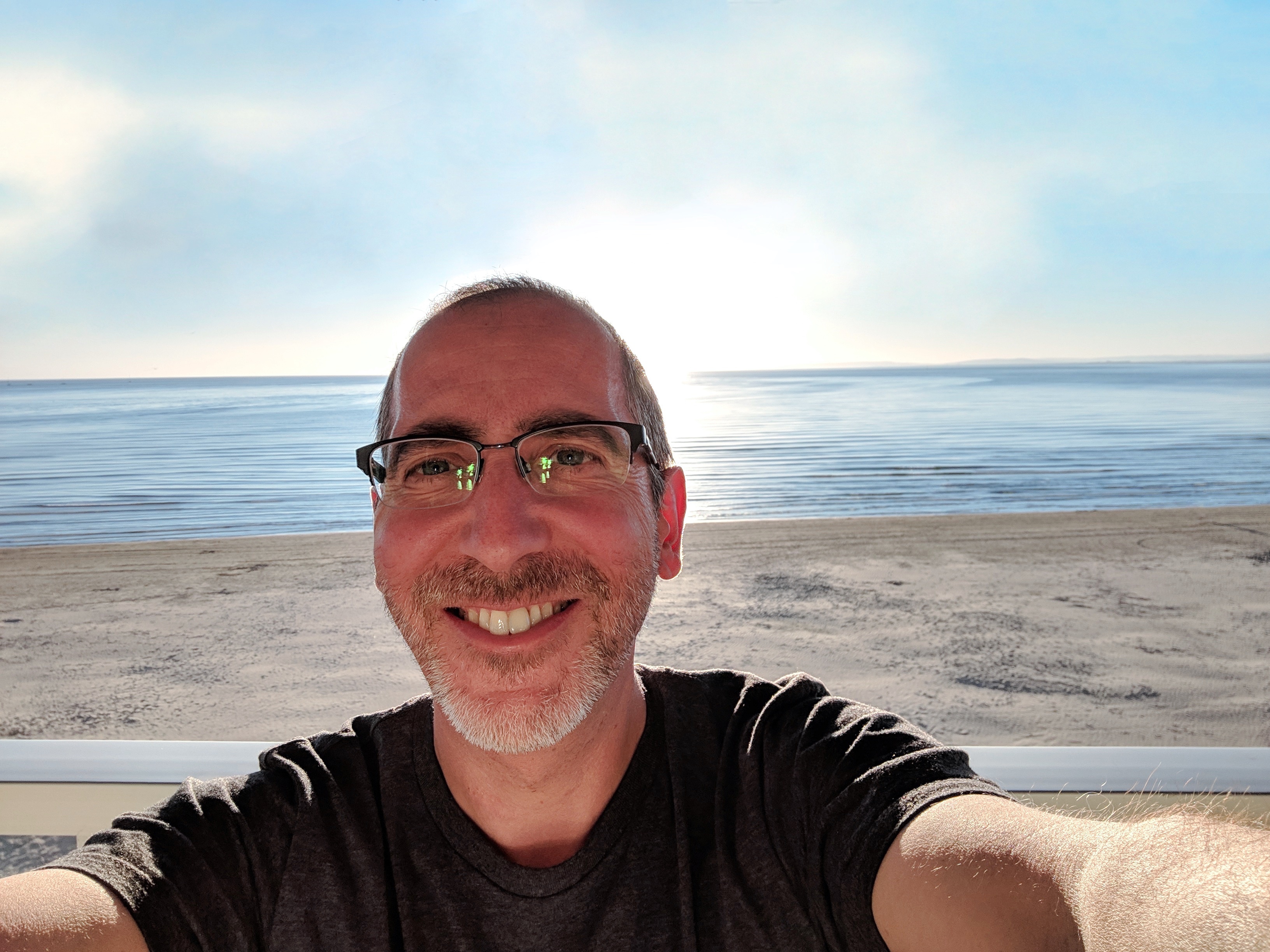 A passion for computer science

Yan grew up in Uzès (FR) and spent his youth there until he completed his baccalaureate. Yan’s first experience of computing was at the age of 11 when he bought his first computer. Since then he has always had a passion for computing, recalling that whilst other kids were busy playing other games, he would be working on his computer.

His teachers recommended he follow the prestigious path leading to Grandes Écoles. This is why he went through the preparatory classes in Montpellier, for a national competition. He entered Telecom Paris Tech, the highest ranked telecommunications engineering school in France, where he specialised in computer science.
At that time, and still today, Telecom Paris Tech required a 6-month’s internship for all students in their third year. Yan carried out this internship in Los Angeles (US) in a small branch of the French company Thomson. “This was a challenging experience as I lived in a one bedroom apartment, consisting of a mattress on the floor and one chair.  That was it. I was not paid much, so making ends meet was tough, but this is where I became fluent in English and started to learn and appreciate the (very different) American culture ”.

“I graduated from Telecom Paris Tech in computer science in 1995. Military service was still compulsory for young men at that time and I was definitely no fan of guns or military life.  Without hesitation, I opted for the possibility to do 16 months as a “Coopérant” (a civil version of the military service), instead of the regular 10 months as a soldier. CERN was a popular “coopérant” destination at Telecom. I applied and was accepted. “
This is how Yan landed in Ferney-Voltaire and started working at CERN for the Controls group in the PS Department (PS-CO).   “I remember my boss, Franck Di Maio, dearly and have fond memories of working under his supervision. Although I was only there for 16 months, Franck valued me and my contributions, and allowed me to take two training classes in object-oriented programming offered at CERN. I had been doing computer science for a while by then and using some of the techniques already but this formally introduced me to the programming techniques that I have used ever since. I still have the books that were given to me during the training.  Franck invested in me, although I was not at CERN for the long term. For this reason, I have a lot of respect for him”.

From the French Riviera to Mountain View in California

“Growing up in  the South of France and having studied three years in Paris, I knew that living there was not my cup of tea” recalls Yan. “Due to my passion for computer science I was attracted to work in Sophia Antipolis, in the French Riviera, famous for being the "French Silicon Valley".
My first job was a software engineer position at a company building a portfolio management tool for financial institutions. Very quickly, I realised that the environment was very much franco-français (as we say in French), with a clear lack of diversity. That was especially difficult to experience after having worked in Los Angeles and at CERN.“
“On my first vacation break, I took a two-week trip to the actual Silicon Valley for the first time. When I came back I was convinced this was where I wanted to be! Through sheer luck, a dear work colleague happened to know Jean-Luc Vaillant (also a Telecom Paris Tech alumnus) who was working in Silicon Valley and made the connection (LinkedIn prior to LinkedIn…). Jean-Luc was working for Fujitsu and his boss was Reid Hoffman ! They flew me over for a one day interview and, when I flew back to France, I had an offer in my pocket”.

It took Yan 7 months to obtain a working visa for the United States!  In the meantime, Yan moved to work for a small company called Trema where he found the same multicultural and diverse atmosphere, which he had enjoyed at CERN. When Yan finally obtained his visa, Jean-Luc Vaillant and Reid Hoffman were no longer working for Fujistu  but for a small company,  co-founded by Reid Hoffman, socialnet.com.  They pitched Yan to come and work with this online dating company and Yan flew back to the United States, to Mountain View in California.

“SocialNet was primarily a dating web site and I worked there until the dot com bubble exploded in 2000.  The concept of «social network» as we know it today did not exist at that time. On socialnet.com, you would create a profile but you would not be connected to anybody else. Behind the scenes, algorithms would determine whether profiles were matching or not based on your expressed likes and dislikes”.

After SocialNet, Yan went on to work with the major company Thomson Reuters, as a senior software engineer, until one day, his friend Jean-Luc Vaillant  called again and asked if he would be interested in joining a small team and work on building a new company that Reid Hoffman was founding, LinkedIn.
This is how Yan’s adventure with LinkedIn started, in September 2002 . He joined as a co-founder and recalls ”This was really the American dream, literally the garage start up (as we were working in Reid’s apartment) where a small team of 10 friends (mostly from SocialNet), all knowing and trusting each other worked to create LinkedIn from scratch. The website was officially launched in May 2003”.

We asked Yan how LinkedIn made a difference at that time, where the inspiration came from and what unique idea made it so successful.
The answer fuses: “Although SocialNet.com was a dating website, it had a separate module for professional purposes. Without any marketing or advertising, the professional side was actually quite successful. This is where the original concept for LinkedIn came from: expanding the profile building aspect of SocialNet with what happens in real life in the business world: networking.”
“Due to my contractual agreement with Reuters, I could not leave right away and I ended up having 2 jobs for a few months. That was tough! I was also taking some financial risks because I had to take a significant pay-cut until LinkedIn could receive funding, which at the time was a total unknown when it would happen or even if! The flip side is of course you get more shares of the company, but at the time the shares were worth nothing. I was still willing to take the risk because of the people that I trusted. To be honest, at that time, we thought that we were going to invest a couple of years‘ work in LinkedIn and then sell the company. We could never have foreseen that it would become the giant company that it is today!”

If you don’t plan for the future of your start-up, you die

We are impressed at how humble Yan is as he says “I know that I am very lucky, it was the right moment, the right idea and the right group of people, and it worked. I was able to help make it successful, not everybody gets this kind of luck.“
“The novelty with LinkedIn was that friends invited friends who in turn invited friends etc.  So you get exponential growth. Every action on LinkedIn is filtered by your network of direct connections, their connections, etc., which requires to scale exponentially. I had to rewrite the filtering algorithm written by a less experienced colleague, after just 6 months, as it was not scaling properly. Exponential growth had never really been a problem before that time.  One of the reasons for LinkedIn's success was that my boss was keenly aware of the scalability issues we would face and was  planning for the future. If you don’t plan for the future of your start-up, you die!”.

Yan stayed with LinkedIn 8 years, until the end of 2010. “By the time I left, the company was a very different beast than the small startup I had known: 4000 employees, different managers, multiple layers of hierarchy, etc… It was definitely time for me to leave. 6 months after I left, LinkedIn went public which profoundly changed my financial situation. Not having to work for the rest of my life, I decided to retire. I had worked hard all those years and now, I had the chance not to have a boss, and do what I wanted on my own time and schedule”
Yan could devote time to making music with computers, for the sheer pleasure of it and no particular ambition. Marrying his passion for music and software, Yan started working on audio plugins: “The various pieces of software I was using to create electronic music were lacking some of the utilities I needed. For this reason, I decided to use my computer skills to extend the software with plug-ins, to be able to do what I wanted”.  As an example, Yan developed an A/B testing utility, which allows you to compare the characteristics of two pieces of music.

In order to share the results of his work of programming for electronic music, Yan founded pongasoft ( https://pongasoft.com/ ) , a one man umbrella company which makes his software available  without charging any fees and in open source format.  This is his chosen way of contributing to society, i.e. sharing the results of the hundreds and thousands of hours of the hard work he puts in, free of charge.

Do not be insular, it closes your mind

“My internship in the US and my work at CERN have had a tremendous impact on the person I have become. When I went to the 20th year anniversary of my promotion in Telecom Paris Tech and met some of my former colleagues, I was very surprised to see that many of them, after studying in Paris, stayed in Paris and have worked 25 years for the same company.
So my advice to young people would be:  Try to broaden your spectrum, go to places where you are in contact with other cultures, other ways of living, and try to avoid the franco-français pitfall ( or similar) as I believe, this will make you a better person. You might be missing a lot otherwise. Taking some risks in your career (like I did with a 6 months internship in a foreign land, leaving my job and taking a pay-cut) can be highly rewarding and worth it!
Also, try to keep in touch with the alumni association at your school (and CERN), as they are usually a source of great resource for your future."

I helped create it

When we ask him which achievement he is the most proud of, so far, Yan answers with a broad smile: “LinkedIn of course, because I can really say I helped create it, I wrote the first lines of code and I hear that some of the code is still running in production 15+ years later.  If you help create something that has become so big and popular, it is a lifetime achievement”.

Thank you very much Yan and congratulations for such great achievements, we hope that when you next come to Europe you let us know so that we may take you underground  to visit CERN's research infrastructure, but make sure that you come before LHC is restarted in May 2021 with Run3!

Other links which Yan shares, which will delight lovers of electronic music and photography:

Oct 23 CERN in the media