Welcome back to my blog Science and Engineering Stories. In the previous article, I talked about the excitement for scientific organizations to deal with the world's problems. Today, I will deep dive into the topic: what could it mean for sustainability for science? 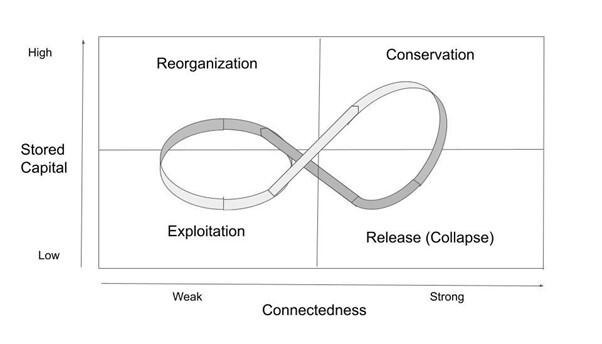 Holling's theory can be used to explain multiple systems in sustainability science. I've recently read a study about the application of the adaptive cycle to the transformation of the "Carbon Valley" in Australia. Carbon Valley is Australia's largest CO2 emission source: with its surface equal to 0.38 % of Australia, produced in 2012 38 million tons of CO2 emission, equals 7% of total Australia's CO2 emission, due to the coal energy production industries residing there since about 1750. Around 2000 the first climate concerns started to emerge from the international community. Australia redacted a plan to cut CO2 emission in "Carbon Valley" shutting down coal production to reduce CO2 emission up to 90% by 2050. Looking at this situation with Holling's theory, now the energy production industry in the "Carbon Valley" system is expected to reorganize in about 30 years, after its collapse that lasted about 250 years. The collapse phase in the Carbon Valley followed strong protests, the loss of social capacity, diffusion of anger, and frustration due to a continuous contrast between local communities, government, and multinational organizations. When human-ecological relationships being dominant up to the start of the coal industry, the conservation phase lasted about 1000 years.

Which phase are we living for modern research infrastructures, like CERN? Are they causing a collapse of the ecosystem they are inserted in or are they still in a flourishing conservation phase?

CERN has a long history dealing with sustainability issues (at least longer than the one of the Carbon Valley) which started in the 90' with the design of the Large Hadron Collider (LHC). As an example, before LHC construction, CERN decided to use refrigerant liquids in experimental zones and HFC (hydrofluorocarbons) materials instead of CFC (chlorofluorocarbons) to minimize ozone-layer damage. That is a good sign leaning towards conservation of the ecosystem. Besides, the first environmental policies report published by CERN in 2018 shows that the majority of emissions (up to 78%) are due to fluorinated gasses: CERN produces 223800 tons of greenhouse-gas emissions, equivalent to a large cruise liner, but still 100 times less of the one of the Carbon Valley. Scientists now know that HFCs are also causing environmental problems (due to their global warming potential thousand times stronger than CO2), hence, CERN decided to adapt its sustainability policies planning to reduce greenhouse gas emissions up to 28% by 2024.

On top of this, CERN deals with the issues of indirect greenhouse-gas emissions due to research infrastructure energy consumption. Currently, large research infrastructures at CERN use up to 1.3 TWh of electricity annually, which is equivalent to fuel about 300,000 homes in the UK for a year. Shutting down accelerator facilities over the Christmas period, CERN was up to now able to decrease energy consumption in the last 30 years in its research infrastructure. However, it is now considering introducing more structured policies now that more energy requiring projects are coming into being. In 2011, CERN started a cycle of conferences with ERF (European Association of National Research Facilities) and ESS (European Spallation Source) called "Energy for Sustainable Science". Besides, in 2015, CERN signed the UN sustainable development agreement (about which we talked in the previous article, https://alumni.cern/news/404136) promising to contribute to the “sustainable energy” goal.

Furthermore, CERN is making steps in creating sustainable mobility initiatives. As I worked there, I remember how the spread was the excitement for participating in the "Bike to work" initiative. In this event lasting two months between September to November, CERN workers challenge themselves to bike to work instead of using their cars. We created a group with my colleagues and we counted the kilometres we biked every day through the app, trying to do better than other teams. I believe what was working was feeling connected to other colleagues while being influenced by their positive behaviours.

I believe modern technology can provide high levels of "connectedness" and "stored value" within ecosystems. I spoke recently with the founders of a start-up that wants to create a social network for users to share their positive actions towards CO2 emission reductions to their network [1]. I found the idea fascinating to convert awareness about climate problems to meaningful action, influencing their peers to perform positive actions for the environment. Another technology that could improve sustainability in today's technology-driven ecological systems is the Human Generated Rating. This technology consists in the generation of a rating for products or services starting from the preferences expressed by users on technological platforms through their direct experience. Using this rating, these social platforms [2] can satisfy user needs no longer through traditional search engines but through the exchange of suggestions within the micro-communities, they rely on. These platforms, in my opinion, provide the users with the possibility to go beyond the "consumerism" mentality.

In conclusion, I believe peer-to-peer positive influence through technological platforms could help with the conservation of ecological systems. Secondly, It is also not true that research institutions are causing the collapse of ecosystems, as they demonstrated so far to put in place strategies to cope with direct and indirect CO2 emissions reduction. The necessity to change to avoid collapse is something we experience every day when we keep our social, human, and ecological systems where we live. Sometimes we tend to react with anger to problems pretending that organizations should change situations from the top rather than starting a transformation from the bottom. I believe we could eventually face environmental challenges instead only with dialogue and cooperation.

I would be very glad to know your opinion on the topic. In case you were somehow touched by my article, please let me know what "sustainability" means to you.