CERN Alumni Second Collisions event is only few hours away, and before we open our virtual CERN gates to you, we would like to bring you the story of CERN Alum, Sharada Mohanty. Sharada will be speaking on Saturday in our         virtual Main Auditorium as part of the AI, Machine Learning and Data Science track.

We are very grateful that he has talked to us about his CERN experience and how that helped shape his future career: “In early 2013 I had reached out to the ROOT team with some security vulnerabilities I had found on the ROOT          website, and later that year, I joined the ROOT team at CERN as a Summer Student supervised by Fons Rademakers. During my Summer Studentship at CERN, I also won the CERN Webfest by building a 3D role-playing game based at CERN aimed at educating the player with the basics of Particle Physics.

I came back to CERN in 2014 as a Visiting Scientist in the Theoretical Physics department at CERN, where I worked with Peter Skands, Ben Segal and Francois Grey on the CERN Public Computing Challenge - an attempt at crowdsourcing the computational power from general public for the computational needs of particle physicists at CERN. This was at a time when India was not an Associate Member State of CERN, and I am still indebted to Ben Segal and Archana Sharma for their role in figuring out how I could come back and work at CERN. I also had a stint at UNOSAT, based at CERN, where we developed GeoTag-X, a platform for crowdsourcing the analysis of digital data coming out of humanitarian efforts.

Over the years, I also was the organizer of the CERN Webfest, and was quite involved in organizing numerous social events for Young@CERN and Summer Students. I still have many beautiful memories from many of these events that we organized and the whole of the time that I spent at CERN.

My time at CERN had a monumental impact on my subsequent career, and even on my life-view. It does not happen everywhere that the person sitting next to you during lunch happens to be a Nobel Laureate, or your supervisor was one of the reasons why the Web exists and he happens to be in the Internet Hall of Fame! Just being in the vicinity of such people gives you the audacity and ambition to take a swing at seemingly impossible problems - if they can do it, maybe I can do it too!”

He told us how his work at CERN has had a great impact on his start-up company: “My work at CERN had crowdsourcing at the heart of it, be it in the CERN Public Computing Challenge or GeoTag-X (at UNOSAT), which I went on to deeply resonate with. During my PhD, I combined my fascination with crowdsourcing and my research in Artificial Intelligence, to start a side-project crowdAI, which eventually became the startup AIcrowd that I have been working on full time for around the last 3 years with a team that has grown to 25 people!”

Sharada has a great impact on society through his work at Aicrowd and we are very proud to showcase some of his achievements: “In my research and at AIcrowd, we work with our community of users to use Artificial Intelligence to solve real world problems. Many of these results get published as research papers, and some are even already being used by real users! Some of my favourite projects which gained traction over the years are: 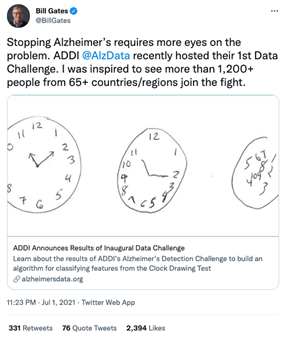 Artificial Intelligence for Alzheimer's Detection: This project is a collaboration with Alzheimer's Disease Data Initiative (ADDI), where we work on the use of Artificial Intelligence for diagnosis of Alzheimers using images from the Clock Drawing Test (CDT). This project brought together thousands of AIcrowd community users to help improve the automated diagnosis of Alzheimers using CDT, and the cherry on the cake was a shoutout from Bill Gates himself 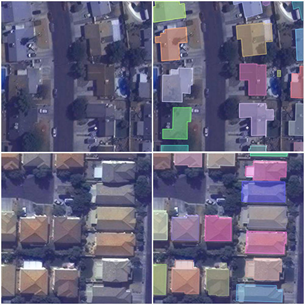 Automated Analysis of Satellite Imagery using Artificial Intelligence: this project was a collaboration with Humanity & Inclusion (HI) (previously Handicap International), on the use of Artificial Intelligence for automated detection of buildings in Satellite Imagery. HI 's main interest here was to use automated analysis of satellite imagery to create maps for areas where humanitarian aid actors are active and where maps do not exist. 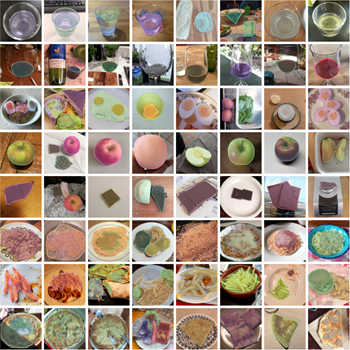 MyFoodRepo Food Recognition Challenge : Using Deep Learning for automated recognition of Food : This project is a collaboration with the MyFoodRepo project at EPFL, where we use Artificial         Intelligence to detect Food Items in real world food images submitted daily by the users of MyFoodRepo app. The AI models developed in this project are already being used in the app for assisted annotations of food items     submitted by the users of the app. The aim here is to eventually develop an automated system which can help make nutritional tracking at scale a reality.

Automated prediction of Autism spectrum disorders in young children: This project is a collaboration with some researchers at University of Geneva, where we use Artificial Intelligence automated detection of Autism by analysing the social behaviors of the subjects in videos.

Lastly, don't forget to join our online event for an amazing weekend filled with fun activities, networking and inspirational talks: "It is already a privilege to be a part of the network of people who have spent time working at CERN. The CERN Alumni Second Collisions event aims to make that network stronger and provides an opportunity to get to know many other alumni who you may not have been at CERN when you were at CERN, but are still sentimentally connected to you because of the CERN connection"